In its determination to get the museum closer to the people through innovative activities, the National Museum of Unity, Ibadan, has again taken the preservation of arts and antiquities campaign to one of the revered palaces in Ibadan to mark the 2019 World Antiquity Day.

With this year’s theme, ‘The Role of Traditional Rulers as Custodians of Cultural Heritage’, the museum visited the Foko palace, not only to advocate the importance of the museum as a bank of people’s cultural history, but also to educate the people of the economic relevance of having a museum.

Foko, which was coined out from the original name ‘Fowoko’ (which means to hold on to this part of the territory), after the war, harboured different antiquities, sites of history among other attractions that will bring both domestic and international tourists to Ibadan and Oyo State.

Foko was chosen among over 35 palaces visited and screened by a joint team of the Museum of Unity and some members of the Culture and Tourism Ministry in Oyo State for the World Antiquity Day, said the curator, National Museum of Unity Ibadan, Dr Amos Olorunnipa.

According Olorunnipa this year’s edition was special, as was the first time in four years that the Antiquity Day had been hosted outside the museum premises. 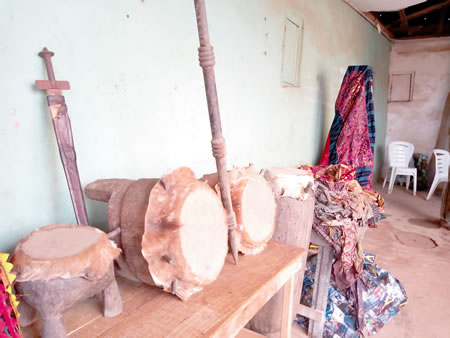 Olorunnipa said the theme rightly informed the choice of Foko palace, which is one of the most ancient palaces adorning the city of Ibadan with several historical contents to showcase.

According to him, the palace is over a century old and is still being preserved till today.

The curator sought further collaborations with Oba  Eddy Oyewole; the Olubadan of Ibadanla and the Foko community for the professional preservation of the historic materials within the palace.

He added that the collaboration could be achieved through the establishment of a community museum within the Foko community and called on people to join hands to make their community a global tourism centre.

“The museum will create a veritable platform for the community to share its stories and antiquity; it will be inspired, by its own heritage and history, because the content of its exhibition will be generated by the community itself.

“It will be a centre of attraction. it will attract tourists, researchers and the entire populace to Foko community, and also generate revenue when fully developed.

“It will expand our scope as museum professionals, develop local art, craft and technology, thereby promoting and bringing tourism closer to the people. It will also bring acquired artefacts closer to the environment that created them.

“It will afford an unprecedented employment opportunities and socio-economic development of the community, he said.

He commended Oba Oyewole and the entire community for accepting to host the national event in the palace premises.

Responding, the royal father said that the palace was established in 1862, with the original name as ‘Fohoko’, meaning ‘something that is handy’.

Welcoming the idea of establishing community museum, he urged the museum professionals never to deviate from protecting and preserving the people’s culture and artefacts.

He thanked God for making the day a reality, and the museum for deeming it fit to organise the programme at the ancient palace.

Earlier, the museum’s Head of Antiquity Protection Unit, Mr Francis Adegboyega, said that the day was set aside to sensitise the public on the need to safeguard cultural property against all ills.

Adegboyega said this year’s event focused on the roles of traditional rulers in safeguarding cultural heritage in order to entrench community museums for better appreciation, thus creating prospect for the community and future generations.

He added that the event was intended to allow for interaction and to evolve a workable synergy on the best ways to preserve, exhibit and enjoy the cultural heritage for the benefit of mankind and posterity.

Oshiomhole vs Obaseki: No retreat, no surrender