What marriage has done to my life — Adekunle Gold 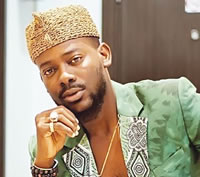 Popular alternative singer, Adekunle Gold may have travelled  around the world, performed at some the biggest stages across  Europe, inlcluding the 02 Arena, and emerged one of the most  sought after Nigerian music stars.

He may have had plenty of successes recorded in the last five  years since he broke into the Nigerian music scene, but one thing  that remains close to his heart, which he cherishes most, is his  marriage to singer, Simisola.

While it is not a hidden fact that the entertainment industry has  witnessed quite a number of marriages among its practitioners,  Adekunle Gold is one entertainer who found his love where he  makes his living.

Even though, his wedding with Simisola Ogunleye, who is otherwise known as Simi was esoteric, the Orente crooner has gone public with how his marriage has had an effect on his career.

Speaking in an interview monitored by R recently, the singer said: “Every day of my life since I met Simi has been a miracle. I’m  grateful that I have a babe that’s very supportive, that doesn’t  shut me down.

“She understands what it’s like to be out at night, clubbing, trying to promote the song because things like that would frustrate an artiste if their spouse doesn’t get it.

“I have a babe that has the best ears. She’s my number one mentor and that’s one person that I look up to when it comes to this  thing,” the award-winning singer added.

No, Deacon Adesina, no

I have a name, brand that can open doors for me —Dami Adenuga

My father still with his abductors three weeks after, actor Odoputa cries out