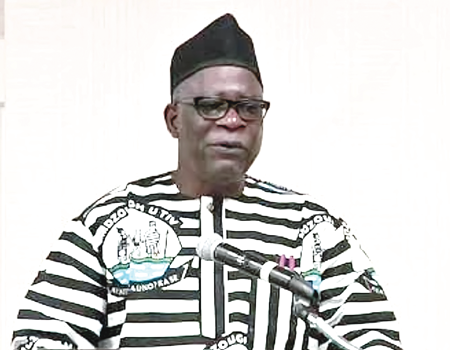 President-General Mdzough U Tiv, Chief Edward Ujege, who is also the spokesman for Benue pan socio-cultural group, in an interaction with newsmen in Makurdi, the Benue State capital, bares his mind on the establishment of state police, a group that calls itself the Coalition Group in the North, for calling for the state of emergency in Benue. Our correspondent, JOHNSON BABAJIDE was there. Excerpts:

WHAT is your take on the call for a state of emergency in Benue State by the so-called Coalition of Northern Group?

They tried it in Plateau some years ago, but  it is  not something that is easy to do without the  National Assembly.

Do you think the crisis in Benue has got to the level of declaring a  state of emergency?

What is happening in Benue State is an invasion of herdsmen on local farmers. And there is a  law  on the ground which government has constitutional power to make for the peace of  the state. Everyone  in the state is  in agreement with the law. The only problem we have is lack of state police to fully enforce the law, because as things are , the Inspector General of Police is refusing to enforce the law.

Let me state here that our governor, Samuel Ortom and his counterpart in Taraba deserve national award for their peace efforts in their respective state.

Also, we  have some groups who have come out clearly like Miyeiti Allah  Kautal Hore which had declared to oppose the law and had carried out their threat, yet, they have not been arrested, whereas, if we had a good police boss who was informed of the threat and promptly arrested  the people, we wouldn’t have the problem confronting us now.  So where is the need for the state of emergency?

You earlier mentioned that the crisis in Benue could have been averted if there was state police, are you also in support of state police?

Let me tell you something, their is nothing as good as having state police.  The bureaucracy  in running the police which is in the control of one person who has the responsibility of taking   decisions  for 36 states of the federation and Abuja as being done in the country currently calls for a  re -think.

With the lean resources of the states of the federation, don’t you think having state police amounts to financial burdens on the states?

Even the federal police we have currently is a burden to states, are you sure that states are not paying for the security being provided by the Federal Government? Please find out and you will be amazed at how much states are paying to keep the peace in every state.

Will you ascribe the call for a state of emergency as a subtle move by these groups in the North to demean the call for state police?

Well, that may be their plan but one important  thing I want you to know is that the Federal Government is buying the idea of state police because the vice president recently supported the need for it to stop farmers and herdsmen clashes.

But the fear in  some quarters is that state police may be abused.

There is no law that cannot  not be abused,  neither do we have laws that are perfect, but one thing is that there are more advantages in having state police than its disadvantages.

In Nasarawa State, the police commissioner there was saying that there was no problem in the state, saying that those in IDP, camps were from other states, but the fact is that the Tiv  indigenes of  Nasarawa State are being  killed everyday.  In about five council areas that are  Tiv  like  Awe, Keana, Doma and others, all the communities in these council areas are currently deserted and  the governor has little or nothing to do because he does not have  the power but  you hear  the state commissioner of police that belongs to the  federal formation saying that there is no problem there. Even the IDPs camp at Kadarko was ransacked and the displaced persons there driven away.

A central police system is the worst thing happening to Nigeria  now;  I stand solidly behind the establishment of  state police. Even if a governor uses it to cheat once, he cannot use it  the second time.  In America, from where we drew our democracy template, there  is even local police and all work together. After all, it has been said  in Nigeria that the ratio of police to the people is abysmally low and the Federal Government cannot cope.

We  in Benue have spoken, we are not going back, we even told the governor if  he still wants  to continue to govern us. It  is what we want that   he must do, if he does anything else, he  is  on his own. The  anti-open  grazing law  has come to stay and we are ready to protect it with our  blood, even if the  Federal Government still decides not to protect us, we are ready to be shot, at least, one person will remain and be able to tell the story that once upon a time, there were people in Benue  whose   lives and properties were  taken and they resisted it, even when they did not carry arms. They relied on the Federal Government for protection  but it failed  them. So, we are not going back on the new law.

After all, the presidential committee mediating between herdsmen and farmers, during their visit, told us that they observed that there was massive land in the northern part of the country with over  two million hectares of land meant for grazing which can occupy the number of cows in the country. Also, the Kano State governor has said that the state has enough land for them to graze, so,  let them go and leave Benue.

Ogun govt allays fears of IPPs over investment security beyond 2019