We must unbundle our Supreme Court, Keyamo tells Senate

•Says it is the busiest in the world 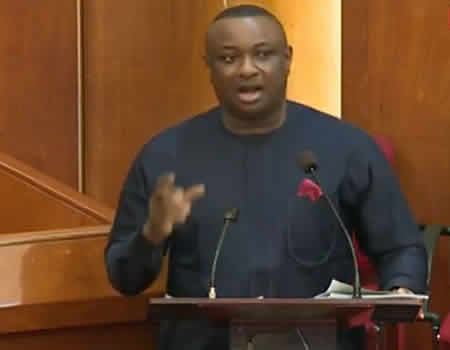 Keyamo made the suggestion on Friday while taking questions from senators in the ongoing screening of ministerial nominees.

Asked by the Deputy Senate President, Ovie Omo Agege,  on what reforms he would carry out in the judiciary if given the portfolio of the Ministry of Justice, Keyamo expressed grave concern over the enormity of the job Justices of the Supreme Court was being saddled with.

On decongestion of prisons and cases listed in courts, Keyamo said the police have been observing the provisions of the Administration of Criminal Justice Act in the breach.

“Every Police station should open itself to the nearest magistrate courts for inspection; same with the Divisional Police Officers.  But they are not complying with those provisions of the Administration of Criminal Justice Act.

“Magistrates should be given the powers to grant bail even in matters involving murder when there is no evidence at the early stage. We should amend the law to make the powers of the Attorney General and Director of Public Prosecutions subject to judicial review. It is subject to abuse when people accused of abuse are freed.”

Responding to question raised by the Senate Majority Leader, Eyinnaya Abaribe that the Okolo Obla  presidential investigation committee on assets, was an illegal agency since it was not a creation of the Constitution, Keyamo admitted that its activities have been subject to an abuse but however noted that the body was not in conflict with the Code of Conduct Bureau.

He said: ” The Code of Conduct and its provisions vis-à-vis the so-called powers of the presidential panel of recovery of public property,  there is a problem.

“The problem is that you allowed the law to remain in your books. That law was passed in 1984 all regarding the recovery of properties, it was a decree.  When we now transited to civil rule those laws now become Acts of parliament.

“The law says the President has the power to criminalize those provisions regarding the code of conduct, it is that Act that makes it a criminal offence. That is the difference,  so it is not in conflict.

“The code of conduct will only bar you from public office, they will not send you to jail but that Act now makes it a criminal offence.

” I am also the lead prosecutor of that panel at some point. The Court of Appeal has even curtailed the powers now, there is a judgement that the Court of Appeal says you cannot charge anybody to court,  you can only investigate and pass your investigation over to the Attorney General of the Federation to make a judgement. Anything beyond that is an abuse of power. ”