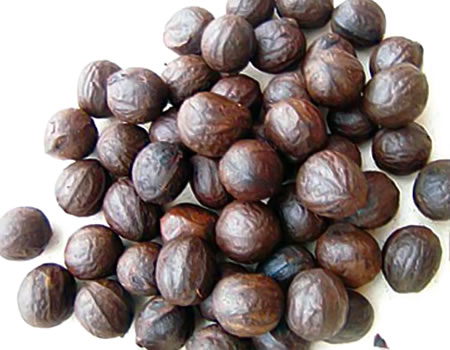 Looking for a natural way to enhance your fertility, then a daily intake of African Walnuts leaves and nuts may be all you need to solve all these problems.

Notably, experts in a new study suggest that African walnut leaves like its nuts also can significantly boost libido or erectile function. It helped boost sperm count and quality.

Walnut is called Asala or Awusa in Yoruba; Ukpa in Ibo; and Okhue or Okwe in Edo.

In fact, walnut leaf extract at the highest concentration showed a more pronounced effect than the standard drug in test animals under laboratory conditions.

Researchers had set out to validate walnut leaf as one of the many medicinal plants used in folklore as male fertility enhancers as well as its possible mechanism.

The study which involved Dr Seun Akomolafe at the Ekiti State University, Ado Ekiti and Dr Ganiyu Oboh at the Federal University of Technology, Akure was published in the 2017 edition of the Journal of Complementary Integrated Medicine.

They evaluated the effect of the aqueous extract from walnut leaves on fertility in adult male rats as well as its mode of action as a fertility-enhancing agent.  The extract and a fertility drug (suspension of clomiphene citrate) were given daily and the experiment lasted for 21 consecutive days.

They found that it could improve sperm production and quality among others. For instance, aside from a significant increase in testis weight, there were also increased levels of testosterone, luteinizing hormone (LH), follicle-stimulating hormone, sperm count and motility in the various treated groups when compared with the control group.

This increment was concentration dependent, while the extract at the highest concentration showed a more pronounced effect than the standard drug. Also, no sperm abnormality was found in all the treatment groups.

Previously, Dr Akomolafe and his co-researchers had confirmed its leaves had no toxic effect on the liver and kidneys at the doses tested.

In the 2017 edition of the Journal of Evidenced-Based Complementary Alternative Medicine, they said assessed the toxicity of the African walnut leaves water extract in rats.

While infertility is not always treatable, it can sometimes be improved with a healthy diet, supplements, and other lifestyle strategies.

Previous studies have shown African walnut leaf extract can also treat alcohol-related infertility.  Dr Akomolafe and his co-researchers in the 2017 edition of the journal, Andrologia, had investigated the effects of African Walnut leaf extract on infertility induced by ethanol in male rats.

Drinking alcohol – even in moderation – can have a dramatic effect on the reproductive system.  It can impact hormone production and decrease semen parameters such as sperm count, motility, morphology, and concentration.

Excessive alcohol consumption has been shown to drastically reduce testosterone production and even shrink the testicles, where testosterone is produced in men.

Because testosterone is directly involved in almost all parts of the male reproductive process, the reduction in testosterone caused by alcohol can cause a range of additional effects, including reduced fertility and impotence, or the inability to get an erection.

Interestingly, co-administration of ethanol with either African walnut extract or drug ameliorated the toxic assault imposed by ethanol on reproductive organs and improved seminal qualities of the rats.

In fact, in 2017, researchers said in the June edition of the Journal of Food Biochemistry that African walnut like tiger nuts also can significantly boost libido or erectile function. Tiger nut is called imumu or ofio in Yoruba, Aki Awusa in Igbo, Aya in Hausa, and Isip Isong in Efik/Ibibio.

Cancer signs men must not ignore

What is good mental health?

Surprising side effects of consuming too much coconut oil