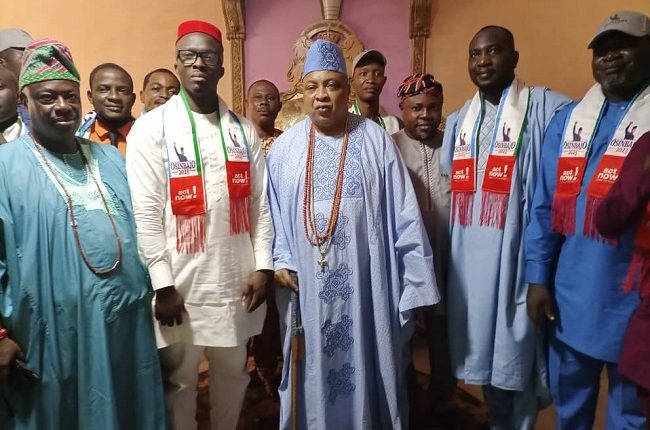 The Akarigbo and Paramount Ruler of Remoland, Oba Babatunde Ajayi, has urged the supporters of Vice President, Yemi Osinbajo, to exercise patience and wait for his decision on the 2023 presidential race.

Oba Babatunde on Monday said several political groups had asked him to prevail on him to declare for the presidential seat, saying “he knows the right thing to do on his ambition.”

The monarch, who doubles as the Chairman of Ogun Traditional Council, said this when he received a group of All Progressives Congress (APC) youths under the umbrella of “Act Now”, at his palace in Sagamu. who are demanding that he (Osinbajo), should declare for the presidency in the coming general elections.

While describing Osinbajo as a competent leader who would deliver if he emerges as president.

“Just like you said, it is a request that you have asked me to put across, I will put it across. It does not cost me anything to put it across to him.

“There is a lot of issues in the interplay of Nigerian politics. Take it from me that that man is a very knowledgeable person. He knows what is right. He knows what he should do. What we need to do is to continue to pray for him that God will grant him wisdom to continue to do what’s right.

“I’m sure he would consider it and he is considering it. Fingers crossed.

“A friend of mine was here recently and he was telling me that, well, if God wants this country to continue suffering that man (referring to Osinbajo) should say he is not interested in the presidential seat. That’s a loaded statement.

“I’m sure he is going to give me a forthright and candid answer.”

The leader of the group, Dr Sola Osindero, in his earlier remarks informed the monarch that members of the group are pure professionals who have found the VP worthy to succeed President Muhammadu Buhari, on completion of his two terms in office.

He explained that Osinbajo had all it takes to administer the country, considering his achievements as a renowned legal luminary, academia and a politician with class.