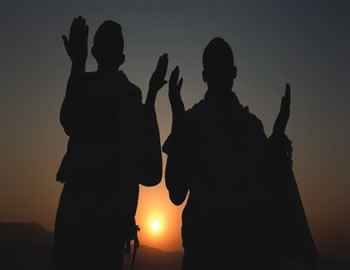 A cleric, Dr Asif AbdulAzeez-Olatunbosun, has said that only visionary, courageous and transparent leaders can restore peace and economic stability to the nation.

Dr Olatunbosun said that the fact that most Nigerians put in positions of leadership were lacking in vision, courage, fairness, morality and financial transparency was responsible for cases of padding of the national budget and conversion of public funds to personal use.

The cleric stated this during the 21st Ramadan lecture organised by Ola-Olu Muslim Society of Nigeria held at the central mosque of The Wings Group of Schools, Iwo, Osun State, in honour of Sheikh Tiamiyu Oyebode-Adisa.

Speaking on the topic “Challenges of Leadership, Morality and Financial Transparency in Islam,” Olatunbosun said that the security and economic challenges facing the country would have been curtailed had previous administrations taken courageous steps.

The lecturer listed the qualities of a good leadership to include honesty, transparency, courage, fear of God, trustworthiness and ability to project into the future.

He added that a good leader must be committed to the needs of the people and live up to their expectations.

The cleric, who noted that anyone lacking in capacity and passion to move the nation forward is not fit to govern the country, charged those in leadership positions to always protect the interest of their followers.

Blaming successive administrations for the current challenges, Olatunbosun said financial recklessness and lack of political will to take decisive actions put the country’s economy and its security in jeopardy.

In his address, the Oluwo of Iwo, Oba Abdul-Rosheed Adewale Akanbi, charged Nigerian leaders to be God fearing in the discharge of their duty of seeing to the well-being of the people.

The traditional ruler commended President Muhammadu Buhari for his efforts towards moving the country out of stagnation and liberating the citizens.

Redeeming the fight against graft