US denies claims it is pulling up to 4,000 troops from South Korea 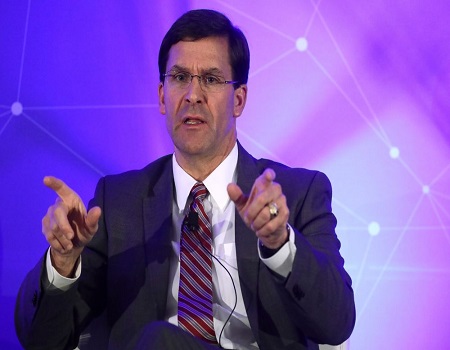 The US secretary of defence has denied a news report in South Korean media that Washington was considering a significant cut to its troop numbers in the country if Seoul does not contribute more to the costs of the deployment.

“There is absolutely no truth to the Chosun Ilbo report that the US Department of Defence is currently considering removing any troops from the Korean Peninsula,” Pentagon spokesman Jonathan Hoffman said in a statement on Thursday, quoting Secretary Mark Esper and responding to the report by South Korean newspaper Chosun Ilbo.

“Secretary Esper was in South Korea this past week where he repeatedly reiterated our ironclad commitment to (South Korea) and its people. News stories such as this expose the dangerous and irresponsible flaws of single anonymous source reporting. We are demanding the Chosun Ilbo immediately retract their story.”

The US broke off talks on defence costs with South Korea this week after demanding Seoul raise its annual contribution to $5bn, more than five times what it pays now, in a rare public display of discord in the alliance.

Neither side has publicly confirmed the numbers, but US President Donald Trump has said the US military presence in and around South Korea was “$5bn worth of protection”.

“I understand that the US is preparing to withdraw one brigade in case negotiations with South Korea do not go as well as President Trump wants,” a diplomatic source in Washington with knowledge of the negotiations was cited as saying by Chosun Ilbo.

A typical US military brigade numbers about 3,000 to 4,000 troops. There are about 28,500 American troops currently stationed in South Korea, which remains technically in a state of war with nuclear-armed neighbour North Korea following a 1950-1953 conflict.

South Korea’s defence ministry said the Chosun report did not reflect “the official position of the US government.”

Under US law, its troop presence in South Korea must not fall below 22,000 unless the secretary of defence justifies a further reduction to Congress.

Chosun Ilbo said the potential reduction of a brigade had already been discussed with the top brass of US forces in South Korea.

South Korean political party leaders visited Washington, DC, on Wednesday to press for a fair and reasonable outcome of the cost-sharing talks.

“I stressed that a withdrawal of US troops from South Korea should not be brought up, as the South Korea-US alliance also helps the US national interest,” said Na Kyung-won of the main opposition Liberty Korea Party.

Meanwhile, South Korea’s intelligence-sharing pact with Japan, which Seoul decided to terminate after relations soured over historical issues and has become the subject of increasing US pressure to renew, is set to expire on November 23.

South Korea’s presidential office is holding a National Security Council meeting on Thursday, where the agreement is expected to be discussed, South Korean media said.