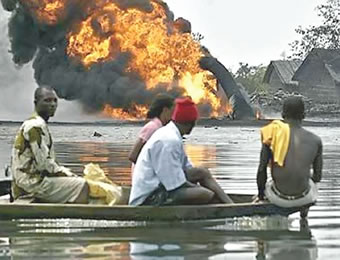 A high-powered delegation of the United States of America (USA), on Tuesday, visited the embattled Gbaramatu Kingdom in Warri South West Local Government Area of Delta State on a peace mission.

The delegation, led by its Consular-General to Nigeria, Mr John Bray, included the Director of the United States Agency for International Development (USAID), Mr Blair King.

They said they were on an engagement visit to promote peace through dialogue in the perceived volatile Niger Delta region.

The Pere of Gbaramatu Kingdom, Oboro Gbaraun 11, who welcomed the delegation at Oporoza, however, urged the delegation to prevail on the Federal Government to give accelerated attention to the demands of the Pan Niger Delta Forum (PANDEF).

The monarch said it was disheartening that after critical stakeholders of PANDEF met with the presidency, no meaningful step has been taken by the latter.

He also called for the commencement of academic activities at the Maritime University in Okerenkoko, adding that it would facilitate human and capital development in the region.

“We hereby reiterate that the demands of the PANDEF must be given sufficient and adequate attention.

“It is disheartening to observe that after the meeting with the presidency by critical stakeholders of PANDEF, no action has been taken on the issues raised.

“Some of the issues raised include holistic implementation of the presidential amnesty programme, clean-up and environmental remediation of Ogoni land, fiscal federalism among others,” he said.

The monarch also decried military invasion in Gbaramatu communities in which many residents including royal fathers were allegedly rendered homeless.

Also speaking, the Gbaramatu Traditional Council of Chiefs described Gbaramatu as peace-loving people but have been branded criminals by those that hate them.

Mr Clark Gbenewei delivered the traditional rulers speech at the meeting well attended by sons and daughters of the kingdom.

“As people of the Niger Delta, we belong to PANDEF and support the 16 points agenda submitted to the Federal Government.

“It is hope that government will met the demands one after the other staring with the take-off of the Maritime University,” he said.

Leader of the US delegation, Bray, while speaking, commended the Gbaramatu people for the warm reception accorded them.

“This is exactly the same thing the vice president did two weeks ago, to maintain peace in the region.

“The warm reception is a signal of a strong tie between US and the Gbaramatu Kingdom,” he said.