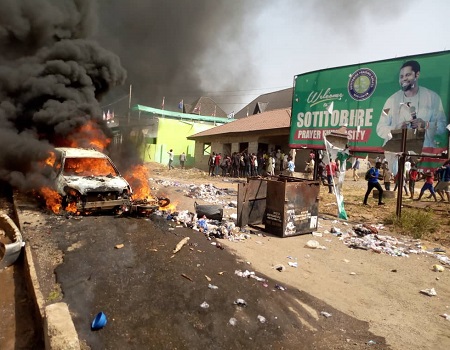 There was pandemonium in Akure, the Ondo State capital, as the church where a one year toddler, Gold Kolawole, was kidnapped during a church service a month ago, was torched by some angry mob. 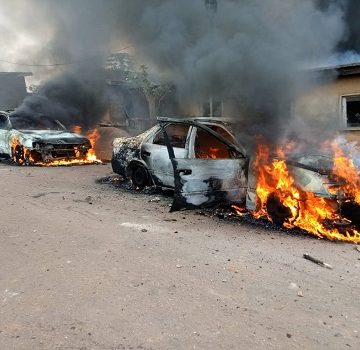 No fewer than four people including a police officer were feared dead and several others were injured during the attack, while about three vehicles were also burnt by the angry mob. 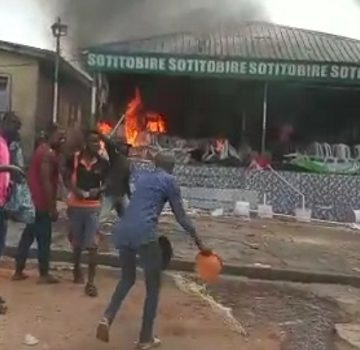 It was gathered that people started trooping to the church in the early hours of Wednesday, after a television station reported that the body of the missing boy had been exhumed from the church altar. 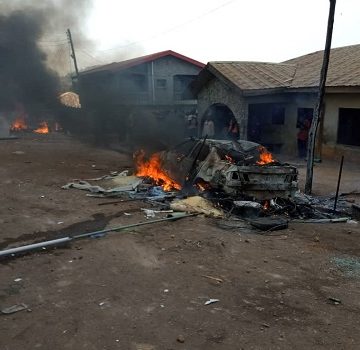 Trouble started when people who visited the church found the story not to be true but found members of the church holding the mid-week service. 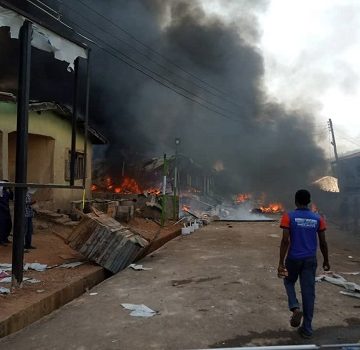 This, according to an eye witness, infuriated the mob who visited the church and started to attack the member of the church but they were prevented by some policemen who had been stationed at the church.

It will be recalled that the church had suspended service for a long time over the missing boy saga.

The policemen were said to have fired teargas to the mob who overpowered one of the policemen and allegedly beat him to death and also planned to burn his remains when some other security men deployed to the scene arrived at the church.

The policemen were alleged to have shot sporadically into the air to disperse the mob while two people were hit and killed by the bullets.

Some journalists who rushed to the scene of the incident were beaten blue-black by the thugs allegedly hired to supervise the church.

According to one of the journalists who explained that the Policemen at the church supervised their beating and said the police were saying “beat them, it is getting too much of them, beat them, use the planks on them,” the officers said to the thugs.

The affected journalists include Temitope Adedeji of Western Post, Eniola Olurankinse of Breeze FM and Tosin Ajuwon of Sahara Reporters.

A resident of the area also explained that those who attacked the church were not happy over the insensitivity of the church towards the matter, especially when it was rumoured that the body of the toddler was exhumed at the altar of the church.

According to the source, the church members resisted the mob and invited police which infuriated the mob, leading to setting the church, vehicles, and some other houses within the area ablaze.

He, however, blamed the state police command for the destruction of property and lives, alleging the complexity of police in handling the case, noting that no arrest was made for over a month until the men of Department of State Security Service (DSS) waded into the matter last week Tuesday.

The General Overseer of the Church, Prophet Babatunde Alfa, was arrested by the men of DSS last week Tuesday over the missing boy.

However, while reacting to the allegations, the State Command Police Public Relations Officer (PPRO), Mr Femi Joseph, dismissed the allegation against the police as false.

He stated that the protest and pandemonium that followed it was fueled by a news report that the body of the baby was exhumed at the altar of the church.

Joseph stated in a statement issued by the command that “the Ondo State Police Command wishes to inform the general public particularly the people of Ondo State that they should disregard the rumours making the rounds that the body of a recently declared missing boy in the state has been exhumed from Sotitobire church in Akure.

“It is most unfortunate that this misleading information spearheaded by a popular TV station has ignited spontaneous reactions from the people leading to wanton destruction of properties and injuries to many.

“The church building was also set ablaze by irate youths. Some of our officers dispatched to the scene to contain the situation were pelted with stones with many of them sustaining injuries, while their patrol vehicle was also badly damaged.”

He said further that “the rejoinder became necessary to disabuse the minds of many Nigerians who might have fallen for this wicked lies and propaganda.

“The public should also not be hoodwinked by reports that the command has abandoned the investigation of the incident, as the case file is already on the way to the DPP for legal advice. Notwithstanding this latest incident, more reinforcement has been sent to the scene to contain the situation.”

The Prophet of the Church, Alfa, was said to have collapsed in the DSS custody, on Tuesday night, and rushed to the hospital for treatment.

However, Akinyemi Omoware, lawyer to the Prophet has filed an application at the Federal High Court seeking for his unconditional release from the custody of the DSS.

Omoware sought for the release of his client from the custody of the DSS saying “the respondents have no statutory power to arrest, detain and investigate the applicant for an allegation of a missing child, same not being a crime against the internal security of Nigeria.

“The fundamental rights of the applicant was not violated by the respondents to warrant the grant of the reliefs sought.”

Sowore: I was never summoned by court ― Malami