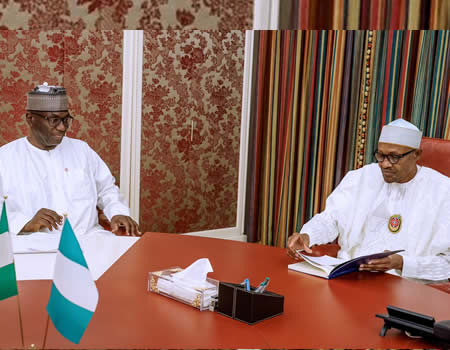 Kwara State Governor, Abdulrazaq Abdulrahman on Monday met President Muhammadu Buhari at the presidential villa, Abuja with a list of demands for his state.

Speaking to State House correspondents after the meeting, he said that Kwara is in “dire straights” and requires the intervention of the president to revive key sectors.

According to him, there had been no investment in any sector of the state’s economy, while his government inherited unpaid salaries.

Abdulrahman said his administration inherited backlog of salary owed teachers, but that it had been able to offset it.

He also said that at the time he took over the running of government, there was no running water in any city in the state.

“When we came in, no running water anywhere but after two months, water is running,” he said.

While bemoaning the lack of investment in the education sector, the governor regretted that about

76% of the federal allocation of the state goes into salary payment.

According to him, there is, therefore, the need to do something to generate additional revenue for the state.

Abdulrahman blamed the previous administration in the state for selling off its assets including the house of the deputy governor, who he said is presently at a rented apartment.

He said the state will provide a grazing land for cattle Fulani to minimize clashes between them and farmers.

Governor Abdulrahman noted that he has continued to work with the structure of government he inherited, saying: “We haven’t changed anybody. The head of service, even cooks, and others have remained in their places.”

“I have explained all these to the president,” he stated.

Only technological innovation can check corruption in Nigeria ― Ashimolowo