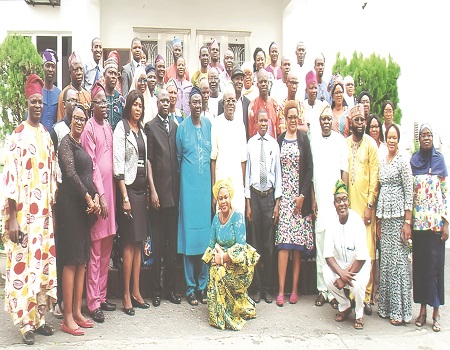 United Nations International Children Education Fund (UNICEF), in collaboration with the Oyo State Universal Basic Education Board, under the leadership of Dr Nureni Adeniran, has initiated actions plan process on the development and sustenance of pre-primary education in Oyo, Osun and Ogun states.

The development which led to a 2- day policy dialogue on the promotion of pre-primary education in Oyo, Ogun and Osun states, held at Kakanfo Inn, Ring Road, Ibadan, recently, drew participants from all the pre-primary school education stakeholders in the three states.

The Executive Chairman, Oyo State SUBEB, Dr Adeniran in his welcome address to the 54 participants, reiterated the commitment of the Oyo State government under governor Seyi Makinde to education development at all levels with an emphasis on pre-primary school promotion and campaign for returning of out-school-children to the formal school system.

According to him, Oyo State government will not leave any stone untouched to ensure its dreams for education advancement in terms of quality and increase in enrolment both at pre-primary, primary and junior secondary levels.

He noted with concern that the importance of basic education could not be overemphasized, being the bedrock of national development, stressing that every individual in our society, communities and religious groups should support Oyo State government’s vision in the ongoing pre-primary and basic education reform process in the state, as he enjoined communities leaders to ensure that government’s efforts on education development are achieved in their areas.

“Similarly, It has become inevitable for every stakeholder in basic education which starts from pre-primary to join the state government in its bid to transform education qualitatively and quantitatively. As a product of a public school, your contributions towards its development and sustenance is very essential. Let us build these schools together,” he said.

She emphasized the need to employ trained caregivers to manage the pre-school programme to prepare the children adequately well for the basic education programme.

According to her, there is a need for communities to take interest in the pre-primary education development process, adding that Early Childhood Education system is captured in the education management information system.

She noted that investment in Early childhood leads to a high rate of return for the family, community and for the nation in terms of human capital. If children are given the right quality pre-primary education, they are likely to enrol in school, stay in school, learn better and likely to become responsible human beings.

Also speaking in the same vein, one of the resource persons for the programme, Taofeek Lamidi from Osun State College of Education, Ila- Orangun stated that parents have the duty to release their children for the programme, as government should provide an enabling environment for the programme to thrive in the country.

According to him, quoting a theory, 70 per cent of the intellect of a child is developed during the early childhood learning period, saying that the earlier a child started schooling at age one, the better for that child and the better for the nation. He asserted that every state government should invest more in pre-primary education and ensure that the newly developed curriculum, Reggio Emilia designed for the pre-primary education programme is sustained in all the public schools in the country.

Director, Social Mobilisation, Information Communication Technology, Oyo, State SUBEB, Mrs Ngozi Akinde, while giving the vote of thanks, enjoined the participants drawn from OYO, Osun and Ogun State to put in their best in ensuring the development of early childhood education in their various states

At the end of the 2- Day dialogue meeting, it was resolved that government should have a separate budget line for early childhood education development and also dedicate fund for implementation of Early Child Care in the state.

As contained in the communiqué, the participants noted that government should mobilize and provide support for the community to establish and sustained Community Based ECCD centres.

UNICEF B Field, Akure, Education Specialist, Muritala Mohammed, stressed that the only way the state governments in the country would make UNICEF happier is when they commit to funding and time to the development of Pre-primary education.