Trump-Putin summit: US president under fire over poll meddling comments 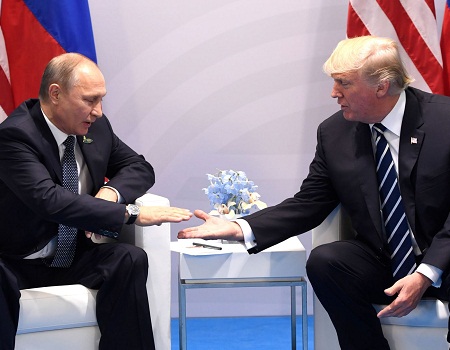 THERE has been a barrage of criticism in the United States after President Donald Trump defended Russia over claims of interference in the 2016 elections.

At a summit with Russian President Vladimir Putin in Finland, Mr Trump contradicted US intelligence agencies, saying Russia had no reason to meddle.

The top Republican in Congress, House Speaker Paul Ryan, said Mr Trump must see that “Russia is not our ally”.

The president’s own intelligence chief publicly broke with him.

Russia is responsible for “ongoing, pervasive attempts” to undermine US democracy, Director of National Intelligence Dan Coats said in a statement.

On Monday, the US and Russian presidents held nearly two hours of one-on-one talks without their advisers in the Finnish capital Helsinki.

At a news conference after the summit, he was asked if he believed his own intelligence agencies or the Russian president when it came to allegations of meddling in the election.

“President Putin says it’s not Russia. I don’t see any reason why it would be,” he replied.

Mr Trump also blamed poor relations with Russia on past US administrations rather than Russian actions.

US intelligence agencies concluded in 2016 that Russia was behind an effort to tip the scale of the US election against Hillary Clinton, with a state-authorised campaign of cyber attacks and fake news stories planted on social media.

Mr Trump later backtracked, tweeting that he had “great confidence in my intelligence people”.