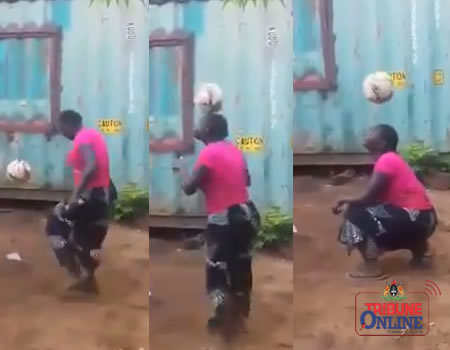 United States President Donald Trump has been attracted to an African woman juggling football in a trending video on social media.

Trump, early on Tuesday morning, reacting to the video, retweeted it with a comment, “Amazing” via his verified Twitter handle @realDonaldTrump, with 58.4 million followers.

The charismatic US President Trump retweeted the video which had earlier been shared by Akin Sawyerr @AkinSawyerr with 4,860, and on Sawyerr’s handle had generated 116K retweets, 390K likes and 3,797 comments.

Some of the Americans reactions to President Trump’s retweet include:

@RobertMaguire_ We’re apparently in day 3 of a national emergency, and Trump is tweeting about things he’s watching on TV and random videos he found on the Internet.

@Davcam1216 My goodness…no matter what the President does someone has got to make a bad thing out of it. Give it a break!!!! Thanks for sharing Mr President!!!

@HolaYoSoyFiesta He’s not talking about the soccer player. He’s referring to the wall in the background

@EdKrassen I can’t believe you actually tweeted something non-attacking of Obama, Hillary or the FBI.

@Tru_Blu_Patriot It’s in response to a positive tweet. Doubt that becomes the norm.

@Kokomothegreat *this is Trump’s reminder that he “cares” about Black people*. Take your gratuitous racist shit and crawl back to that all white cave youre hiding out in

@Spacejunkie4 The desperation has switched into high gear.

@emrazz Honestly Donald who the fuck told you this was a good idea.

@Chapman_Histo I think he’s talking about the wall behind her.

@BridgetPhetasy What is happening?

@ItsGoneAwry Don’t question it! Just enjoy it while we have it…and thank God it isn’t Kamala dancing.

@williamlegate …that you have time to troll around on social media and watch viral video clips during a national emergency!

@SonOfGodAndMan So are you just an old guy on Facebook now?

@TweetnMeSoftly The irony of him retweeting that is dumbfounding

@RampCapitalLLC She’s better than our USMNT