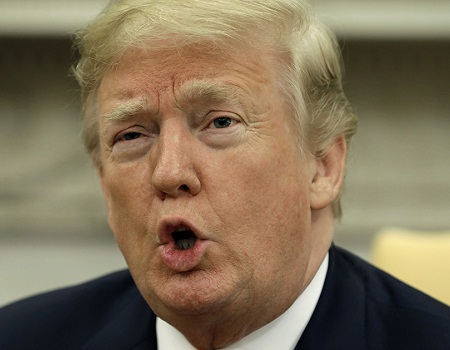 The United States President, Mr Donald Trump on Saturday announced the total defeat of the Islamic State of Iraq and Syria (ISIS) terrorist group in Iraq and Syria territories.

Trump, in a statement issued by the White House Office of the Press Secretary, said ISIS had been defeated 100 per cent in its former controlled territories of Iraq and Syria.

“I am pleased to announce that, together with our partners in the Global Coalition to Defeat ISIS, including the Iraqi Security Forces and the Syrian Democratic Forces, the United States has liberated all ISIS-controlled territory in Syria and Iraq – 100 Percent of the ‘caliphate’.

“Just two years ago, ISIS controlled a vast amount of territory in both Iraq and Syria.

“Since then, we have retaken more than 20,000 square miles of land and liberated millions of Syrians and Iraqis from ISIS’s ‘caliphate’.

“ISIS’s loss of territory is further evidence of its false narrative, which tries to legitimise a record of savagery that includes brutal executions, the exploitation of children as soldiers, and the sexual abuse and murder of women and children.

“To all of the young people on the internet believing in ISIS’s Propaganda, you will be dead if you join. Think instead about having a great life,” Trump announced.

The United States leader noted that “while on occasion these cowards will resurface, they have lost all prestige and power”.

The president added that ISIS terrorists “are losers and will always be losers”.

He went further that “We will remain vigilant against ISIS by aligning global counterterrorism efforts to fight ISIS until it is finally defeated wherever it operates.

“The United States will defend American interests whenever and wherever necessary. We will continue to work with our partners and allies to totally crush Radical Islamic Terrorists”.

Trump had declared that the Islamic State of Iraq and Syria (ISIS) would be eliminated from its last territory in Syria by Wednesday night.

While holding maps of ISIS’ territory in Iraq and Syria before and after his election, Trump pointed to a very small portion of the map that was currently being held by the terrorist group.

The U.S. leader declared that by the end of Wednesday, “the mission will be complete”.

“I brought this out for you because – this is a map of everything in the red, this was on election night in 2016.

“Everything red is ISIS. When I took over, it was a mess.

“Now, on the bottom, that’s the exact same: There is no red. In fact, there is actually a tiny spot, which will be gone by tonight,” Trump had declared at a press conference at the White House.