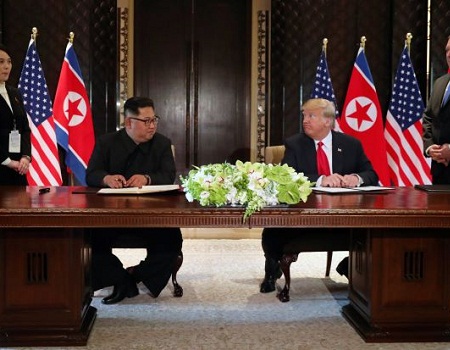 UNITED States President Donald Trump and North Korean leader Kim Jong-un signed an agreement on Tuesday pledging to support a peaceful resolution to seven decades of hostilities between the two countries and a de-escalation of nuclear tensions.

Under the agreement, the US committed to providing security guarantees to its old enemy while North Korea “commits to working towards complete denuclearization of the Korean Peninsula”.

That provision falls short of the hoped-for “complete, verifiable, irreversible denuclearisation” of North Korea that had been urged by the US and its allies in the build-up to Tuesday’s talks.

Trump defended the agreement at a press conference on Tuesday afternoon, saying both he and Kim are committed to its provisions.

“Today is the beginning of an arduous process,” Trump told reporters. “Our eyes are wide open, but peace is always worth the effort, especially in this case.”

Trump said economic sanctions against the country will remain in effect until North Korea reverses its nuclear programme, and added there are no short-term plans to reduce the number of US troops – some 28,500 – stationed in South Korea.

Trump and Kim capped a one-day peace summit by signing the agreement without immediately disclosing the terms. Trump stayed on to detail the agreement at a later news conference while Kim left the summit for a return flight to Pyongyang.
Earlier, at a signing ceremony, Kim said: “We had a historic meeting and decided to leave the past behind. The world will see a major change.”

Trump added: “A lot of work and a lot of preparation went into this. The meeting went better than expected and no one could’ve expected this.”

As both leaders stood on a hotel veranda to say their final goodbyes, Trump said: “We’ll meet again. We will meet many times.”

Analysts are divided over the agreement, with some saying it does nothing to avoid repeating past mistakes in similar attempts at a denuclearization deal.

Others see the summit as a welcome reversal to decades of hostility and harsh language between the US and North Korea.

“An important first step has been taken with the historic agreement even if it is scanty on details,” said Eugene Tan, associate professor of law at Singapore Management University.

“Much work remains to be done and there will be obstacles ahead for sure given what is at stake for all stakeholders.”
Geoffrey See, a founder of the Choson Exchange, a Singapore-based non-profit that organises business workshops in North Korea, said: “The summit is still short on details on how both sides will achieve their objectives. But the summit has reversed a process [by] putting trust, relationship and aspiration at the start rather than at the end.”

Tuesday’s summit, which began about 9 am local time and ended with the signing shortly before 2 pm (06:00 GMT), was punctuated by handshakes, smiles and upbeat comments from both Trump and Kim.
Trump met Kim on Singapore’s Sentosa Island at the Capella Hotel, a former British colonial barracks converted into a high-end hotel, starting with a carefully choreographed handshake greeting against a backdrop of US and North Korean flags.

Following initial comments to reporters Tuesday morning, Trump and Kim went into a private meeting accompanied solely by their translators, then a larger meeting with aides to both men, and finally a working lunch.

Before heading into the private meeting with Trump, Kim said: “The way to come to here was not easy. The old prejudices and practices worked as obstacles on our way forward, but we overcame all of them and we are here today.”