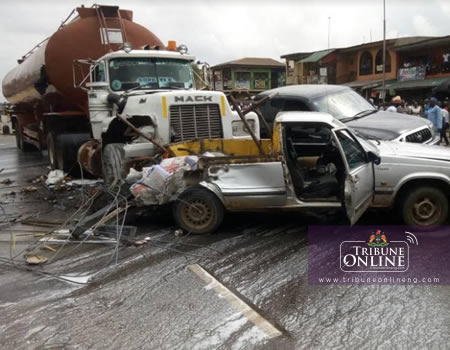 Mr Ogbodo Uche Peter, driver of a Mark Truck with registration number AGB 338 YV, on Friday, knocked down a yet to be identified middle age woman walking along the road.

Eyewitness accounts have it that the fatal road traffic crash happened at Lake opposite OANDO fuel station by 1000 blocks before Borromeo- round about Onitsha, Anambra State, at about 1250hrs. And that the crash was due to speeding.

The female adult was rushed to Toronto hospital by FRSC rescue team from Upper Iweka Outpost. She was later confirmed dead by the doctor on duty and her body deposited at the Morgue.

The driver was apprehended and handed over to Nigeria Police for proper investigation.

The Sector Commander FRSC, Anambra State Command, Mr Andrew Kumapayi, warned motorist to desist from speeding especially in built-up areas. He advised that the recommended speed limit of 50km/hrs should be applied in built-up areas so as to guide against loss of control.

He also warned pedestrian to be watchful while walking along the road, saying that it is better to walk on the left side of the roads facing oncoming vehicle so as to guide against being knocked down by speeding drivers.

The Federal Government is owing the university workers, under the National Association of Academic Technologists (NAAT), the Senior Staff Association of Nigerian Universities (SSANU) and the Non-Academic Union of Universities and Associated Institutions (NASU), over N150 billion earned allowances… Truck driver allegedly killed

One killed, shops razed as Yoruba, Hausa clash in Ibadan

I didn’t partake in ZLP meeting, my loyalty is with Makinde ― Oyo Commissioner