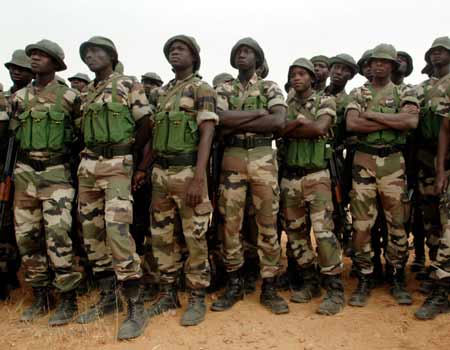 The Defence Headquarters, (DHQ) on Tuesday stated that the troops of Operation Delta Safe have dislodged Militia’s camps and rescued five expatriates kidnapped in May this year by an unknown militant group in Yellow Island.

This was contained in a statement made available to newsmen in Abuja by the Coordinator,  Defence Media Operations, (DMO), Major General John Eneche.

According to the statement, “acting on credible intelligence, a joint team from Forward Operating Base Bonny, Nigerian Navy Ship Pathfinder and troops of 146 Battalion swiftly combed the creeks in search of the kidnapped victims.

“The identified camps were subsequently destroyed to deny the pirates freedom of action”.

The statement explained that consequently, in the early hours of Tuesday, the pirates/militants, compelled by the ongoing operation, surrendered to the gallant troops and handed over the five kidnapped foreign expatriates at Iwofe Waterfront.

It stated that the five expatriates comprised three Russians, one Ukrainian and one Equatorial Guinean and were currently receiving attention at the NNS Pathfinder medical facility.

The statement further hinted that in a related development, the joint team intercepted two large wooden boats laden with an estimated 350,000 litres of suspected stolen illegally refined AGO and about 10,000 litres of stolen crude oil.

It added that the stolen petroleum products have been recovered to the Base.

According to it, the Military High Command commended the gallant troops for their resilience and encouraged them to sustain the tempo against the enemies of the country, calling on the members of the public to support the troops by providing credible intelligence that would aid their operations.

We Must Work Together To Address Daily Challenges Confronting Our People, Says Osinbajo