#ThursdayTales: Two friends and a fool 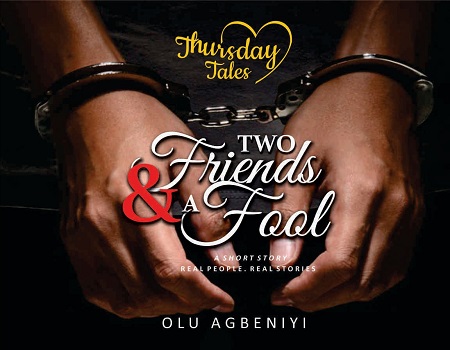 Just about 3 days ago I was one of the happiest men in the world. I was actually living my dreams. Everything I had ever imagined and dreamt of had become a reality for me. I had my own house, not just a house, it was my dream house. Calling it a house is even an understatement; it is a palace. I had a fleet of top of the range cars. At the last count, I had 8 luxury cars. My life was on cruise control. I could decide to travel to any part of the world at my convenience. My bank account was loaded. I had achieved all these through hard work. Above all, I was in love with one of the most beautiful woman ever created by God. I am just 28 years old.

I had attended a seminary until I was sixteen. My parents had wanted me to become a priest, and thereby a source of pride for my family; particularly my father. But ever since I was a child, I wanted to be a musician and this was much more important to me than preaching and learning about man’s sins. I knew I would find God along my journey of life but not in the seminary. All the years I spent in the seminary were the most boring years of my life. Don’t get me wrong, I love God and I am a believer but I wasn’t just cut out to be a priest. The only thing that kept me sane whilst there was music. I wrote songs every day. I wrote as if my life depended on it. I knew that one day I would walk out of the seminary and fulfil my dreams.

When I turned sixteen I found the courage to confront my father and broke the news to him about my passion. He was heartbroken particularly after realizing that I’ll rather do music than any other thing. My mother was supportive though but also sceptical of my choice of career. They both thought being a doctor, a lawyer; an engineer or an accountant would have been nobler. Anyway, my mind was made up that it was music and nothing but music.

At first, I didn’t know where to start, but if you are passionate about your belief you will always find a way out. I looked for a studio and I started out as a backup singer with another upcoming musician. I put all my energy into developing my vocal strength. Years in the seminary had also given me the opportunity to learn how to play some musical instruments. My love for the piano was an added advantage; I started playing the piano with the band as well. In no time I started gaining more recognition in the industry. By the time I turned eighteen I started a band with 2 other guys and we released a single which became an instant hit. There was no doubt that I was the star of the group. I was approached by a record label and a juicy contract was offered which I quickly jumped at.

I went solo immediately; my life and my career went on another level. My management was out of this world. I became a sensation at the tender age of nineteen; just 3 years after leaving the seminary. My songs were always on number 1 on the charts; my videos were on point, getting millions of views within hours. I became a household name. Endorsements started rolling in. In no time I became one of the highest-paid artists in Africa.

With all my success and achievements I remained humble and grounded in my faith. Because of my strong Christian background, I neither drank nor smoked which was uncommon in the entertainment industry. I had no tattoo on my body. I tried to live a clean life. Above all, I had no girlfriend despite all the millions of girls at my beck and call. I was a virgin. I was determined to live a clean life and be celibate until I am married. This was strange to many people around me. Some people actually thought I was impotent while some thought I was homosexual. Though I had millions of female fans hovering around me every moment but I kept it very professional.

I set up a foundation to give back to the society from what I had been blessed with. I offered scholarships to orphans and help the widows. It was on one of my visits to the foundation office that I met her. I was on my way from one of my monthly visits to an orphanage close to the office when I decided to pay a surprise visit to the office. Just at the entrance, I met her. She was one of the beneficiaries of the foundation as she had lost both parents at a tender age. She was studying Law at one of the Universities in the country. She was walking out whilst I was walking in and we almost ran into each other.

At that moment, it seemed to me that time stood still, and a new song surged within me. When I looked into her dark eyes and saw her lips were poised between a laugh and silence, at that moment I learnt the most important lyrics of a song; the one you are only capable of understanding in the heart. It was love at first sight. Something older than humanity, it was more melodious than any music. She smiled, and that was certainly the signal I had been waiting for all my life. It was the pure Language of the music mixed with love. It required no explanation. What I felt at that moment was that I was in the presence of the only woman in my life, and that, with no need for words, she recognized the same thing. I was more certain of it than of anything in the world. I finally found the missing part of my life.

My relationship with Kristal started instantly. We became inseparable. She was a second-year Law student and I made sure she lacked nothing. Our relationship became stronger each day; she became the centre of my universe. Few months into our relationship she introduced me to her closest friend; Larry. Larry was also her coursemate at the university. I got attached to him and I started paying his bills as well. Larry and Kristal became part of my team. We travelled the world together and I made sure they lacked nothing. All along I still maintained my stance on premarital sex and I was glad Kristal also agreed with me on these which actually made our relationship stronger.

After she graduated, she wanted to go for her master’s degree at Oxford University. Larry was unwilling to go to Oxford, he said he was already prepared to start working immediately and by the way, he was also in a serious relationship and about to get married but I was able to persuade him to change his plans. I wanted him to be closer to Kristal and keep an eye on her for me and I covered the entire bills. I bought a three-bedroom apartment for her in London and made sure they lacked nothing. Because of my regular engagements, my schedule was so tight, but I made sure I visited her as regular as I could.

Three days ago, I decided to do the needful; to officially propose to Kristal. I bought a diamond ring and off I went to England to surprise the love of my life. I arrived at the apartment around 7pm I knocked on the door but nobody was at home. I opened the door with my spare keys and decided to wait. I put my luggage in the spare bedroom, switched off all the lights and sat anxiously in the dark living room. After about an hour, I heard the car parking. I peeped through the window and saw my beautiful Kristal coming out of the car towards the apartment. I quickly ran into her bedroom and hid myself in the wardrobe.

A few minutes later I heard the apartment door opened. Then I heard some disturbing smacking sound. The bedroom door flung open, and then the smacking sound continued. I peeped through the little crack on the wardrobe door and saw the shock of my life. Larry and Kristal were kissing passionately and struggling to get out of their clothing. At that moment everything in me stopped. My head began to spin uncontrollably, my heart was beating faster than the regular beat, I felt a lump in my throat and I began to sweat profusely.

Though the whole room was in darkness but I was able to see everything clearly because my eyes had adjusted to the darkness. They were both naked now moaning hungrily on the bed. I slowly opened the wardrobe door Kristal was on top of Larry and both of them were moaning with pleasure. I didn’t know for how long I stood there until they both looked towards my direction. They quickly disentangled and started looking for their clothes which were scattered on the floor.

I was filled with rage. I ran towards Larry and started strangling him. Kristal was pulling me back but I was stronger than her. I punched and kicked him while he tried to fight back but I was stronger than him. I picked up the bedside lamp and smashed it on his head, he fell down and I continue d kicking him, Kristal was screaming all along but I didn’t stop until he couldn’t move that was when I realized that he had lost consciousness. A few minutes later the police arrived and I was arrested, I was later informed at the police station that Larry was pronounced dead at the hospital.

#ThursdayTales: The games we played

#ThursdayTales: Three minutes in the kitchen