#ThursdayTales: Three minutes in the kitchen 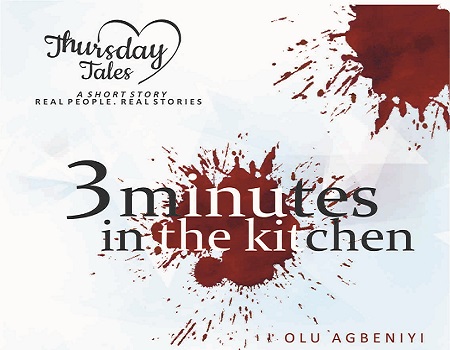 Tomorrow is the day I will be judged, I will know my fate at the end of the day. The lawyer told me that I will be charged for manslaughter instead of murder, he further went on to say that if I plead guilty the sentence will be lighter. He said I am lucky that David is still alive; he was just in a coma for a few days but now he is fine. Do I feel lucky? No! Why didn’t he die? He killed me 15 years ago. I died an untimely death. Everything in me is dead. I turned on the uncomfortable prison bed and reflected on how I got here. I had spent 2 months in this small cell awaiting judgment for a crime I committed.

I stood at the entrance of the church and I watched him preach. His movement was so swift and sleek. He is so eloquent and well dressed. He was wearing a navy blue three-piece Italian suit; his shoes were glassy-sparkling to the brightness of the spotlights on the altar. The church was filled to capacity. The congregation was so engrossed and carried away by words. Come to think of it he was actually preaching about forgiveness and restitution. Isn’t it ironic that the man preaching about forgiveness and restitution finds it difficult to ask for forgiveness for the abominable sin he committed against humanity? He was actually talking about restitution and explaining that and emphasizing on making amendments to those that have been wronged.

I slowly looked around for an empty seat in the back row; I spotted close to the aisle and I quietly made my way to the seat. I sat down and closed my eyes.

ALSO READ: ‘Do nothing Democrats, I did nothing wrong’, Trump cries…

Images of that cold Saturday evening flashed through my memory. The night that has always remained engraved in my heart. The night I died. It was 15 years ago and I was just 15 years old. I discovered my love and passion for music when I was about 10 years old since then I had been a core member of our local church choir. This Saturday night I was coming back home from the choir rehearsals and David volunteered to walk me home because he lived just 2 streets away from me.

David was 20 years old. He was in the university studying law, but during the holidays he was always in the church choir. He was quite good with the piano. I liked him a lot because he is one person I respected for his dedication and dexterity on the musical instrument. I was closer to him than the other guys in the choir; I was always looking forward to his coming home for the holidays.

As we walked home that night he was busy telling me about his school and studies whilst encouraging me to study law as well. We got home and he walked me to the door. My parents were not at home, earlier in the evening they had gone to visit a relative who just gave birth to a baby. My older brother had travelled out of the city with my uncle; my younger sister had gone with my parents. The house was completely empty. I opened the door with my spare key and walked in with David. I offered him a glass of water as I dropped my handbag on the sofa. He sat down whilst I walked to the kitchen to get him the glass of water.

As I was opening the fridge I felt a movement and I turned around; David was standing by the door looking at me. I was shocked because I left him sitting in the lounge. I took a bottle of water and walked towards him then I noticed the look on his face was strange. He walked towards me, collected the bottle from me and put it on the kitchen cabinet. He held my hands, looked into my eyes and told me that I am beautiful. I smiled shyly and walked away from him trying to find my way back to the sitting room. He grabbed me strongly from behind, I struggled to get out of his arms, he was too strong for me. He kicked the kitchen door closed and pushed me to the floor. He grabbed a knife on the kitchen cabinet with his right hand while he started removing his trousers with the other hand. He told me to keep quiet or else he would stab me.

I was in deep shock. The look on his face was terrifying. I thought I was in a nightmare. He moved closer to me and forcefully lifted up my dress. I started crying and begged him to stop but he never listened to me. He tore off my pants and pinned me to the floor; then he forcefully entered me. I was a virgin and the pain was sharp, stabbing and annoying.

The whole incident lasted about 3 minutes but left lifetime damage on me. He stood up when he was done and told me that what happened must be kept as a secret or else he will come after my family and kill them one after the other. Then he left me on the kitchen floor walked out. I didn’t know how long I remained on the floor but I finally forced myself to stand up and clean up before my parents’ arrival.

I felt a gentle nudge on my shoulder which jolted me back to reality. I opened my eyes, standing by my side was a well-dressed usher; I quickly realized that I am still in the church. The congregation was now on their feet singing. The pastor had just made a call for sinners to come out and give their lives to God.

I slowly stood up, took my bag and started walking towards the altar. Each step I took reminded me of the walk from the kitchen to my room after the rape. I finally got to the altar where a few sinners like me were already standing in a straight line waiting for our next step towards redemption. I was the last person to get online. I kept my head bowed and looked straight at my feet. Suddenly, the singing stopped and the pastor started praying for us. I looked up slightly and I saw him moving to the first person on the line; he put his right hand on his head as he prayed for him then moved to the second person and performed the same rituals. I smiled slyly, bowed my head and continued looking at my feet.

I felt him getting closer to me; I slowly opened my handbag and gently slid my right hand inside. I felt the handle of the knife I had kept there for a while; it was the same kitchen knife he had used to threaten me 15 years ago. I had kept the knife that long only for one purpose. He is now praying for the young lady next to me.

Suddenly, I saw his black glassy shoes in front of me; he was standing in front of me. I felt his touch on my head as he started praying for me. I gently slid out the knife out of the bag and leaned closer to him. I lifted my head up and looked straight at him. He looked down at me and a quick recognition was obvious. He was frozen before he could recover from the shock I lifted the knife and stabbed him deeply in the chest, I pulled out the knife and I stabbed him again in the crotch and left the knife there. All this happened within the split of 15 seconds. He screamed and the congregation shouted amen; they thought he was still praying. The usher standing behind me saw what happened and screamed.

The church went into pandemonium. He was holding his crotch trying to stop the bleeding between his thighs and bleeding profusely from the stab on his chest as well, blood was all over the altar. I stood where I was with a satisfied smile on my face ready to face the music. The security guys came over and took me while the ushers and some other members rushed to him to help. I was later arrested and charged for murder.

That is how I ended up in this small cell awaiting judgment for the sweetest of all revenge. Whatever the judgment is I will still do it again if I find the opportunity. He stole my life, my virginity, my dignity, my innocence and my happiness. I am prepared to make his life miserable.

US President Trump impeached by House of Reps