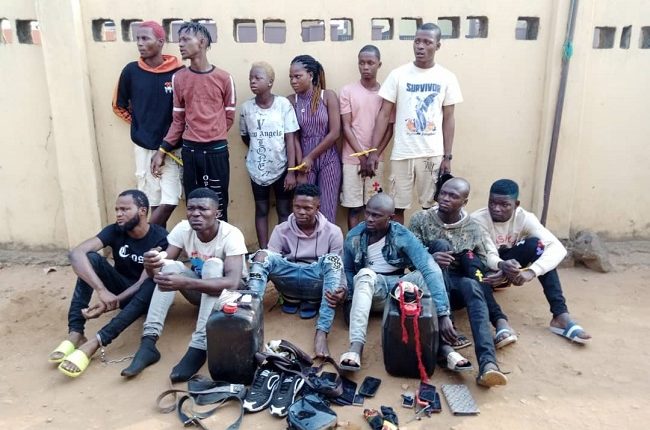 Share
No fewer than three persons suspected to be cultists have been killed and many others injured in the Abesan area of Lagos State.
The clash between Eiye and Aye members reportedly started on the Boxing day when some members of one of the cult groups were attacked and a reprisal attack on Monday led to the death of three people.
This is just as the police in the state arrested about fifteen suspected cultists during raids on different black spots in Ikorodu and Ajah area of the state.
The Abesan killing was said to be a reprisal attack from suspected members of the Aye cult group whose members were attacked last weekend.
The Nigerian Tribune gathered that trouble started around the Abesan Low Cost Housing Estate when suspected members of the Aye cult group attacked their rival group.
Two members of the Aye group were reportedly badly injured in the attack, resulting in the reprisal attack that led to the death of three persons on Monday.
Meanwhile, the police in the state swung to action and arrested fifteen members different cult groups in the state.
The image-maker in charge of the state police command, Muyiwa Adejobi in a statement on Tuesday confirmed the arrest of the suspected cult members.
Adejobi said “as part of its efforts to protect lives and property in Lagos State, the Lagos State Police Command has been on the trail of criminals who have been terrorising Lagosians at strategic locations, especially in Ikorodu and Lekki/Ajah areas of the state in order to decimate their plans.”
“On 28/12/2020 at about 4am, while responding to a distress call from Agunfoye area of Ikorodu, the Police Surveillance team attached to Ikorodu Division of the Command arrested one Taiye Lasisi ‘m’, 20, of Agunfoye, with a locally made Revolver pistol.”
He also continued that “after his arrest, a search was extended to other black spots in the area where 13 (thirteen) other suspected cultists belonging to Aiye Confrarternity were arrested.”
He listed the arrested cult members as Segun Ariyo aka Zangalo, who was once arrested and transferred to the disbanded SARS in Lagos, Kazeem Akinpelu, Ibrahim Oni, Tobi Awoyefa Yusuf Okunlowo, Oyesanya Damola ‘m’, Bola Hassan ‘m’, Toheeb Adesina ‘m’, Hassan Ashiru Onafowokan Michael, Folahan Adeola, Damilola Adeola and Julius Ihara.
According to Adejobi “exhibits recovered from the suspects are eight mobile phones, three bags, one black belt, one White handkerchief containing four lighters, one black nylon containing some charms, some expended and live ammunition and two black 25 litre kegs containing skuchies.
“Similarly, the police operatives in Akodo Division, on December 28, 2020, at about 4am, arrested one suspected cultist, Lekan Razak (20) while attempting to rob at No. 25, Ibomide Street, Ibeju Lekki, Lagos.
“The suspect, who has confessed to be a member of Eiye Confraternity, was arrested with a locally-made pistol with some live cartridges.”
The Commissioner of Police, Lagos State, Hakeem Odumosu, has ordered for the transfer of the suspects to the State CID Panti, Yaba for discreet investigation.
He also reiterated his zero-tolerance for cultism and other crimes in the state.

Adejobi, however, said that he was not aware of the Abesan cult clashes and killings but promised to find out and get back to our correspondent but could not do so as at the time of filing these reports.

Police arrest man, two sons, others who supplied 10,000 arms to bandits inside…