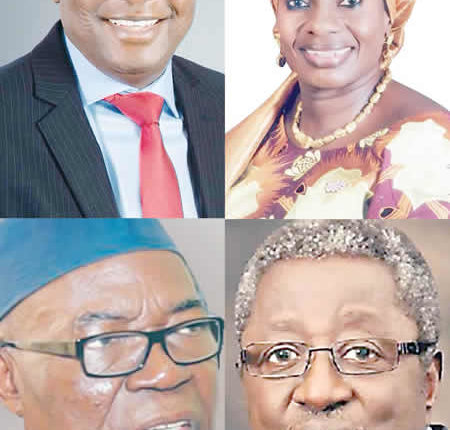 Some major power brokers, including old war horses in the politics of Plateau State are locked in a fierce battle for the Plateau South senatorial seat, writes ISAAC SHOBAYO.

THE death of Senator Ignatius Longjan, who represented Plateau South until February this year, was a rude shock to the people of Plateau State, especially his constituency. Before his demise, he was once a career diplomat and held major political positions such as Chief of Staff and deputy to former Governor Jonah Jang before his election into the Senate in 2019.

While alive, Longjam was an unrepentant apostle of peace. And in his glowing tribute, his former boss described the deceased as a gentle, dedicated and loyal deputy governor.  Senator Longjan died on February 10, 2020 in a hospital in Abuja after a brief illness. He was the deputy chairman of the Senate Committees on Foreign Affairs and also Culture and Tourism, in addition to being a member of other committees.

But shortly after he passed on, many political actors in the Southern Senatorial zone and the state in general began scheming to succeed him in the Senate, to the chagrin to a lot of people. They wondered at the speed at which the scramble for his seat among politicians in the Southern zone and their allies in the district, even when his body was still in the morgue.

The 1999 Constitution as amended provides for the conduct of a by-election by the National Independent Electoral Commission within three months upon notification to fill the vacuum. The commission is yet to announce the timetable for the election. Many gladiators have jumped the gun in the battle to fill the vacant seat in the Senate.  The horse-trading is more pronounced in the All Progressives Congress (APC) and the Peoples Democratic Party (PDP).

In the ruling APC, the state governor, Simon Lalong; Minister of Women Affairs, Mrs Pauline Tallen from the zone are the major stakeholders. They are also said to be more interested in who replaces the deceased in the Senate.  The duo are said to favour any of their perceived loyalists to secure the seat because of the politics of 2023.  The thinking in some quarters is that that if one of the other influential APC member is allowed to grab the senatorial ticket and win the election, it will be difficult to prevail on such individual not to seek second term..

It would be recalled that MrsTallen contested for the senatorial ticket in 2019 but lost to the prefer candidate of the governor, Longjan in a controversial circumstances. The insinuation then was that Governor Lalong preferred Longjanbecause he might not seek reelection in 2023 on the ground of his age to pave the way for the governor to run for the Senate.

The permutation is hinged on what isd gradually becoming a tradition in politics in the country.  Most governors tend to head for the Senate after spending two terms of four years in office as state chief executives. Others are either made ministers or given other choice appointments at the federal level if their part forms government at the centre. So, characteristics of second term governors, the assumption is that the next move of Governor Lalongat the expiration of his current second term in office might be Senate in 2023. Another theory doing the rounds is that there are plans by some forces to prop him up a running mate to presidential candidate of the APC if the party fields a southerner as its standard-bearer in 2023.

In the meantime, the feeling in some camps is that the governor is seriously concerned about who should be the choice among the APC faithful lobbying to go to the Senate. Majority of those who have shown interest in the ticket are his disciples and foot soldiers. It was gathered that his former Chief of Staff,  Mr. John Dafwan; serving Commissioner of Youth and Sports,  Mr. Victor Lapank  and the chairman of Qua’Pan Local Government area, Mr. Isaac Kwallu  have commenced consultations within the party in their bid to secure APC ticket for the seat in the Senate. Dafwan is presently one of the aides to the deputy Speaker, House of Representatives, HonourableIdrisMaje who is also from the senatorial zone.

A sourceindicated that the battle for the ticket has polarised the party beyond the senatorial zone. It was learnt that a group in the APC is said to prefer chairman of Qua’Pan local government.

In the PDP, most of the gladiators are being careful not to plunge the party into round of crisis. Only recently, the PDP in the state resolved its leadership crisis after the intervention of the national leadership of the party. In the last election in the zone, the PDP performed below expectations; its candidate, Peter KefasLar could not withstand the candidate of APC. The major undoing of the party then was that its candidates, including the ones for the House of Representatives and Senate came from Langtang North and Lantang South axis in the zone. The arrangement did not go down well with most of the electorate in the zone.

According to the sources, some stakeholders in the party are not favourablly disposed to the idea of allowing Kefas to be senatorial candidate of the PDP. Their argument is that he is relatively young in the politics of the zone. There are reports that some forces are putting pressure on the leadership of the party to throw the race open to all eligible contestants in the spirit of internal democracy.

A source close to the party further gathered that a former Speaker of the State House of Assembly, who also once served in House of Representatives,Honourable George Daika might join the senatorial race if he succumbs to entreaties from his supporters.

There are reports also that some forces are interested in dragging the gubernatorial candidate of the party in the 2019 election, Gen Jeremiah Useni (retd) seeking the PDP senatorial ticket. GenUseni was a member of the ninthNational Assembly before he contested for the governorship election 2019. However, his media consultant, Pastor Yijap Abraham said the alleged moves by his principal to contest the senatorial election was a mere speculation, adding that he had not told anyone that he was interested in the seat he left five years ago.

From all indications so far, the local government areas, where candidates for the election are expected to come from in the zone comprise Wase, Langtang North, Langtang South, Mikang, Shendam and Qua’Pan. A commentator Dr Anthony Ibrahim posited that the election would shape the politics of the zone and entrench justice and fair play if properly handled by main actors from the APC and the PDP.

Speaking on how the senatorial seat has been rotating in the zone,Dr Ibrahim said Wase Local Government Area might not have the opportunity of producing a senator from the zone due to some reasons, including the fact that the currentdeputy Speaker of House, HonourableMaje is from the local government.According to him, Langtang North and Langtang South, which are homogenous, occupied the seat for 12 years. They are Senator Victor Lar; the late Senator John Shagaya  and most recently, Senator Jeremiah Useini, who lost the last governorship election to Governor Lalong. Dr Ibrahim also observed that  Shendam Local Government Area alone in the zone, which is dominantly occupied by the Goemai ethnic stock,  has an advantage: highest number of federal and state political appointments. The serving governor, minister of women affairs, the vice-chancellor of the University of Jos and a member of House of Representatives Hon Alphonso Gomsol hail from the area. It has also produced a senator in the person of the late Senator Cosmos Niangwan.

It is apparent that the race for the vacant senatorial seat is bound to generate more issues that are bound to reshape the politics of the Plateau. It has since gone beyond the battle of wits among the major political gladiators and godfathers. Suffice to say that the discourse will centre on the question of power rotation, the need for fairness, equity and justice.

Besides, many of the key actors are looking beyond the quest to determine who secures the seat. Part of the permutations is the desire to prepare the ground for the politics of 2023. This is one of the reasons the battle for the senatorial seat is taking different forms and shapes almost on a daily basis.

Cryptocurrency Trading: Tips That Will Get You Started