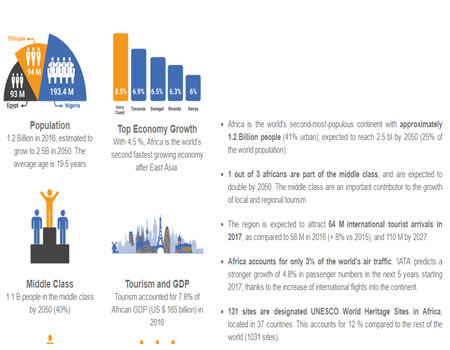 Terrorism in Africa has been identified as the biggest bane of the continent’s travel and tourism sector, identifying countries such as Nigeria, Kenya, Tunisia, Mali, Burkina Faso, Côte d’Ivoire and Egypt as the biggest victims.

The 2017 Jumia Travel hospitality report on the African continent, which identified terrorism as biggest challenge in Africa’s tourism growth, was recently presented to the media and major stakeholders in the travel industry in Lagos by the managing director of the company, Kushal Dutta.

The report categorically stated that the terrorist attacks in these countries have impacted negatively on their tourism revenue.

Meanwhile, the report has predicted that the continent will attract 64 million international arrivals before the end of 2017 as compared to 58 million in 2016 – an 8% growth year-on-year. Still, it is not clear how the affected countries will benefit from these figures if the terrorist attacks are not curtailed.

Despite the continent’s low contribution to world’s air traffic at 3%, International Air Transport Association (IATA), has predicted a 4.8% increase in number of passengers in the next 5 years starting in 2017. The feasibility of this is made firm due to the increase in international flights to the continent.

For more information about the report, see the link to the report here.

Jumia Travel, as stated by Dutta, is Africa’s No.1 hotel booking website, allowing you to get the best prices for more than 25,000 hotels in Africa and more than 200,000 hotels around the world. Our ambition is to bring every bit of available accommodation online, and to create the easiest and cheapest way for customers to book it.

“Jumia Travel was founded in 2013 by Jumia and is backed by MTN, Rocket Internet, Millicom, Orange, Axa and financial partners,” Dutta.

US gives WFP $9.5m for good health of pregnant women, children under 5