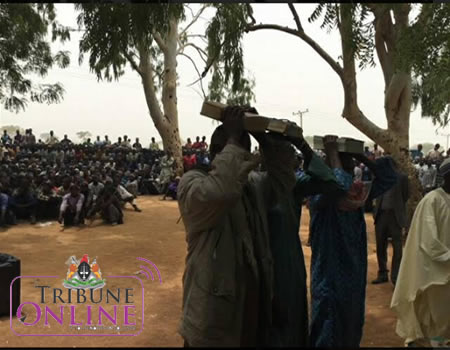 Gunmen suspected to be armed bandits invaded Maikunkele community, a suburb of Minna metropolis in Bosso Local Government Area of the state and abducted an Igbo businessman.

The armed men in their numbers were said to have invaded the area from the nearby forests and rocky terrains around the Minna International airport facility, shooting sporadically into the air to scare away possible resistance after which the hoodlums headed for their target.

The abduction of the Igbo man comes barely one year after another Nigerian of Igbo extraction lost his life in a similar circumstance.

While the shootings lasted unchallenged, residents scampered for safety. Many ran into nearby bushes while others took cover inside the nearby weekly local market.

While the former later died in the hands of his abductors, the assailants, it was gathered had allegedly written a threat letter to the latest victim intimating him that they would be coming for him after.

The threat the Tribune Online gathered was not heeded to or acted upon by the embattled  Igbo man.

Already, there is tension in Minna, the state capital and environs as the news about the abduction of the Igbo man who is said to be from Enugu State spread with residents expressing concern that the armed bandits have infiltrated into the capital city despite assurances of protection of lives and properties by security operatives in conjunction with the state government.

The latest abduction occured barely two days after armed bandits attacked a community in Munya Local Government Area of the state, killing one person and abducted no fewer than 65 people in the early hours of the morning on Thursday.

Police Public Relation Officer (PPRO), Niger State Command, DSP Wasiu A. Abiodun could not be reached to confirm the attacks of Munya Local Government Area and that of Maikunkele as he did not pick calls.

However, the President Ohanaeze Ndigbo, Niger State branch, Chief Emmanuel Ezeugo, confirmed the abduction of the Igbo man whose names could not be ascertained as of the time of filing this report.

“I can confirm to you that an Igbo man, operating a provisions store at Maikunkele was abducted by armed men. This is similar to what happened last year when another Igbo man was killed in similar circumstances,” he stated.

The Ohanaeze leader further disclosed that, “We were told that the armed men after last year’s attack on the other Igbo man had written to their latest victim, telling him that they were coming after him.”

Tribune Online further learnt that efforts are, however, being made to rescue the victim. According to Ezeugo, the relevant state government agency has been contacted over the latest abduction.