Entertainment
By Kola Muhammed On Feb 9, 2020 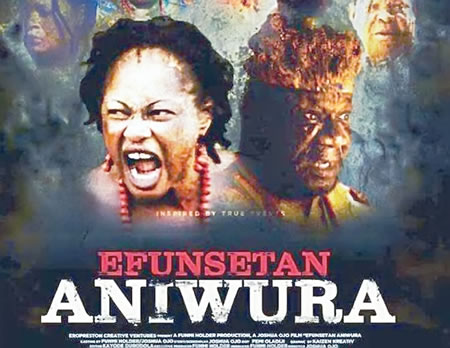 If one were to take a poll of some of the most popular women in Yoruba history, it may not take too long before names like Moremi and Efunsetan come up. Such is the famed history of these two women in Yorubaland. However, it seems that many of these histories are fading with time, as foreign sources are believed by historians to be the most reliable when it comes to African history.

The movie ‘Efunsetan Aniwura’, produced by Funmi Holder, the producer of popular TV series, ‘Tinsel’, premiered on January 31 at the cinemas and tells the story of Efunsetan, a famed woman in Yoruba history.

Efunsetan, born in the 1790s, lost her parents at a tender age, an incident which contributed to her resolute character which was deemed by her peers to be hard-heartedness. She became a successful trader of cash crops and slaves and she rose in fame to become the Iyalode of Ibadan after her second marriage took her from her native Egbaland to Ibadan.

The film highlights many of Yoruba legends and histories which are beginning to be sunk up by the tides of time and may only be revived and redefined through storytelling and theatrical showcase.

The film, admittedly, did not exhibit pulsating theatre experience that film lovers are taking to be the norm for hit movies, given the rather straightforward telling of the story.

Given the economic challenges faced by filmmakers, the rather conservative portrayal of Ibadan city in the movie seemed understandable, with only four chiefs and a handful of villagers to show for the famed historical town of Ibadan.