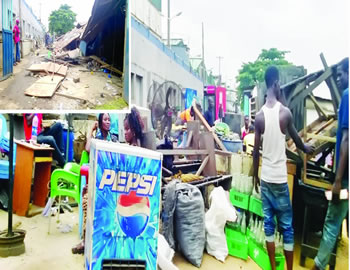 Helpless food sellers and other business operators, at the Old Toll Gate area of Lagos, battled to hold back tears when their business centres were demolished by officers of the Lagos State Ministry of the Environment (MOE) on Wednesday.

The traders who were reportedly given only a 24-hour notice to evacuate their belongings from the trading centre, which was located directly at the back of the 7-UP Bottling Company, at the Old Toll Gate end of the Lagos-Ibadan Expressway, were left with no choice but to gather their wares in small packs.

This, according to information gathered from a reliable source, was a far cry from what the traders were used to, based on the fact that officers of MOE often gave them long notices in the past.

While the motive of the government for demolishing the centre remained a mystery to the hapless traders, Lagos Metro gathered that the development might not be unconnected with cases of homeless thugs turning the shops at the centre to their homes at night. There were also cases of sales and smoking of Indian hemp there.

This allegation was also re-echoed by an eyewitness, whose office was closed to the demolished centre.

The man, simply identified as Tunde, noted that government could have taken the action because “area boys had turned the centre into an arena for smoking marijuana.”

When contacted the spokesperson of the Ministry of the Environment, Mr Tunde Awobiyi, denied having knowledge of the demolition exercise. However, he noted that for the government to have carried out the action, it meant the place must have contravened the state’s environmental laws.

“The fact that they (traders at the centre) had always gotten away with trading there did not mean what they were doing was right. There are laws guiding the rights of ways in Lagos, and there are also numerous laws protecting trees and flowers in the environment from all forms of encroachment,” he said.