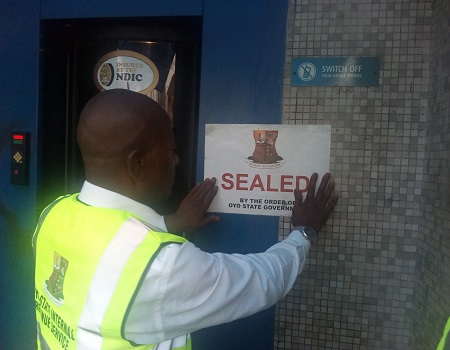 BUSINESS activities were on Monday morning paralyzed as many banks in Ibadan, Oyo state capital, were sealed by the officers of Oyo state board of internal revenue under the task force team tagged Oyo State Inter ministerial Enforcement Unit for their failure to pay Environmental Developmental Levy (EDI) levy in the state.

As early as 9 am, no fewer than 13 different branches of the various banks were shut with sealed notices with padlock and keys placed at the property.

Some of the areas the enforcement team carried out their activities include, Dugbe, Mokola, Idi-Ape, Agodi Gate, Secretariat Road, Challenge, Jericho, Bodija, UI among others.

Immediately the officials of the affected banks were seen running around to tidy up their papers to save losing the whole days business.

While some succeeded in making the necessary payment as fast as they could to resume operations, some others were seen still trying to reach out to superior authority for further directive.

The tax, which is paid to the coffers of the state government is said to be paid for the impact of the various business and corporate entities on the environment across the state, due for payment between January and March.

It was gathered that the Board of Internal Revenue also issued a reminder notice to the affected banks and organisations on July 9.

The affected banks were also said to have been found guilty for various duration ranging from 2015 to 2018, despite series of official communications and reminders to the management at different times.

It would be recalled that the Oyo State Board of Internal Revenue (OYBIR), the coordinating agency for collecting all government revenues had last month issued a 14 day ultimate to all taxpayers in the state to pay up all outstanding dues and levies to the coffers of government.

The Chairman of the Board, Mr Bicci Alli had warned in the paid advertorial that the agency would embark on massive enforcement to seal up all erring corporate organisations on the expiration of the ultimatum.

But a source hinted that about two weeks after the expiration of the 14 days, the OYBIR had also written series of reminder letters to the affected banks, to which no response was gotten until the enforcement.

Many people who were within the affected bank premises when the enforcement team sealed up were seen with shock on the faces and expressing disappointment that cooperate organizations like banks could default in tax payment.

Alli said the enforcement team decided to focus on banks to serve as a deterrent to other defaulting corporate organisations, adding that the exercise is continuous.

He said “it is going to be a continuous exercise throughout this week, next week and become part and parcel of our revenue administration until people learned to do the right thing.

“Some of them owe about two to three years. We wrote letters to them and gave them notices to pay, still, they refused. So, as a result of failure to pay that we now embarked on the needful.

“The exercise did not affect only the banks, we have some corporate organisations and individuals that are owing. Well, the focus now is that we will collect every kobo that people are owing the state government.

It’s so sad that not until we have to take this step against the banks that are now actually coming out to pay. Now, the level of compliance after their premises were sealed up is about 90 percent. You could see that all of them have been coming forward to pay what they were owing the state government now.

Sexagenarian man in court for allegedly defrauding woman of N565,000

Man in court for allegedly stealing employer’s goods worth N40,000

Friction with Makinde over land revocation will end ― Ajimobi