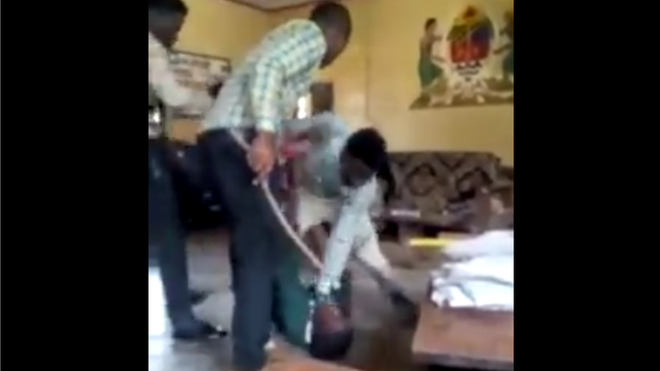 Authorities in Tanzania have ordered an investigation into a video which appears to show a group of five teachers savagely beating a student.

The headteacher of the school, in the town of Mbeya in the southwest of the country, has been suspended.

In the short video clip, which was widely shared on social media, several men are seen forcing the boy to the ground with kicks and slaps.

Corporal punishment is illegal in Tanzania.

A BBC News correspondent says this incident is likely to generate a heated debate about the extent to which the law is being implemented in the country’s schools.

The 38-second footage has raised outrage online, with Tanzanians demanding that the government take action against the culprits. Several

Twitter users shared their dismay with the hashtag #ArrestMbeyaSecondaryTeachers.

The video appears to have been filmed in a staff room, and the victim is believed to be around 16 or 17.

Tanzania’s Home Affairs Minister, Mwigulu Nchemba, said the government had sent a team of investigators from the ministry of education and security to probe the incident at Mbeya Day Secondary School.

A government statement said the headteacher, Margaret Haule, had been suspended for “not taking action even after being aware of the incident.”

The assault was allegedly filmed on 28 September by a teacher not involved in the beating, who has also been questioned about it.

Burundi to leave the ICC six months after probe announced

Africa has 1.2 billion people and only six labs that can test for coronavirus —…