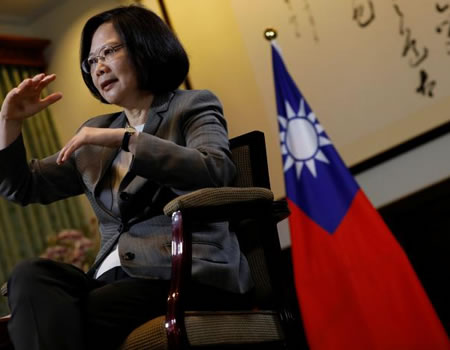 Taiwan President Tsai Ing-wen said another direct phone call with US President Donald Trump could take place again and she urged the self-ruled island’s political rival China to step up to its global responsibility to keep the peace as a large nation.

“We have the opportunity to communicate more directly with the US government,” Tsai told Reuters in an exclusive interview on Thursday.

“We don’t exclude the opportunity to call President Trump himself, but it depends on the needs of the situation and the US government’s consideration of regional affairs.”

The interview was the first since Trump, as US President-elect, took a congratulatory phone call from Tsai in early December.

It was the first contact between a leader of Taiwan and an incumbent or incoming US president in nearly four decades and Trump cast doubt on Washington’s long-standing policy of acknowledging Beijing’s “one China” policy, which claims Taiwan is a part of China.

The call angered Beijing because it forbids contact between government heads and Taiwan’s leader, for fear of such contacts would confer sovereignty on the island. Democratic Taiwan, self-ruled since 1949, has no interest in being ruled by autocratic China.

However, Trump agreed to honour the “one China” policy in February and then hosted Chinese President Xi Jinping at his Florida resort earlier this month.