Real EstateProperty and Environment
By Dayo Ayeyemi | Lagos On Nov 30, 2021 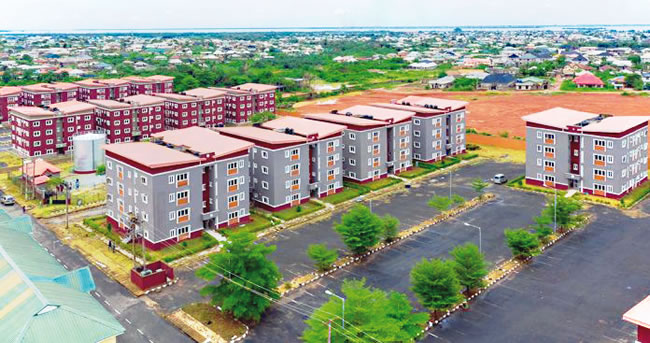 Leaders across the country have been advised  to study the blueprint of the former  Civilian Governor of Lagos State, late Alhaji Lateef Jakande’s  affordable housing.

The advice became imperative, according to  a  development economist, Chief  Babatunde Fanimokun, following  the insinuations by some Nigerian leaders that affordable housing delivery is no longer feasible.

Speaking at the third Jakande Housing Lecture Series, (JHLS), held in Lagos, Fanimokun  enumerated some of the processes used by former the  governor to achieve affordable housing which he said include elimination of middle men, building on demands, emphasizing on labour only as well as government providing the land and infrastructure.

The guest speaker said Jakande did not believe in using yesterday’s method for today’s challenges, adding that he was always thinking and coming up with fresh ideas to enhance development and governance unlike the current crop of leaders in the country.

He stressed that planning for success was the secret of Jakande’s administration.

The guest speaker at the JHLS said the secret of Alhaji Jakande’s success was captured in his 6 P’s which he spelt out to mean ‘Prior Proper Planning Prevents Poor Performance.’

He described late Jakande as a visionary, selfless and serious-minded leader who had his blueprint for governance ready before he was sworn into office; hence he was able to flag off a housing estate in Amuwo Odofin exactly 45 days after becoming a governor which was completed within the first two years of his tenure.

He said Jakande did not only take care of the low-income earners as it was erroneously believed in some quarters as he introduced a Site and Service Scheme and Private Developers Scheme which made Lekki area of Lagos to account for over 150 private housing estates as of 2010, a development which has energized the economy of Lagos and make life better to the citizenry.

The seasoned technocrat, who worked with late Jakande in the provision of affordable housing to Lagosians, reeled out what made the achievements of the former governor possible.

“Apart from being a visionary leader, Alhaji Jakande was an embodiment of selflessness and was an incorruptible leader,” he said noting that these enabled him to implement practicability of incorruptibleness under a democratic setting.

Extolling the former civilian governor’s virtues, lecturer at the University of Lagos, Prof. Olugbenga Nubi, challenged the present crops of Nigerian leaders to emulate Late Jakande in order to replicate his style of leadership.

Chairman of the Real Estate Developers Association of Nigeria (REDAN)’s Board of Trustees, Prince Seyi Lufadeju, commended the consistency and loyalty of REDAN to the virtues and what Late Jakande stood for.