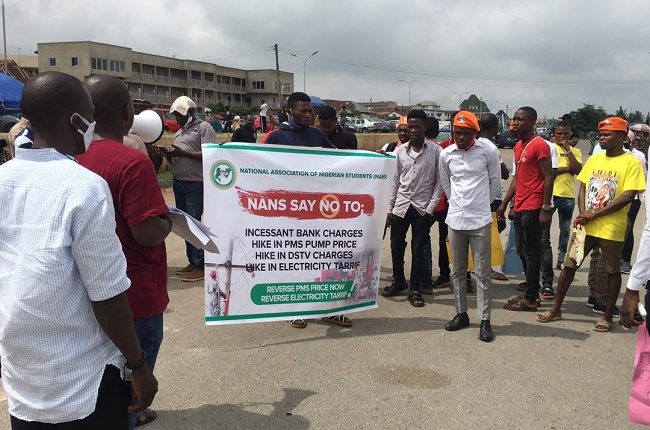 Angry youths in Ondo state on Tuesday, took to the streets of Akure, the state capital, protesting against the recent increase in the price of Premium Motor Spirit (PMS) also known as Petrol and electricity tariff by the Federal government.

The youths, armed with placards and banners condemned the insensitivity of the Nigerian government to the plight of the common man, saying the present administration in the country has failed to bring the promised change.

The youth under the auspices of the National Association of Nigerian Students (NANS) chanting various anti-government songs condemned the decision of the federal government to increase fuel and electricity.

Some angry residents of the town, however, joined the protesting youths, accusing the federal government of deliberately punishing Nigerians with its policies.

They described the All Progressives Congress (APC) led government of President Buhari as incompetent adding that it has unleashed more hardship on Nigerians than any other past government.

Speaking, Coordinator of NANS Zone D, Mr Kowe Odunayo, described the increase in the petrol price and electricity bills as wickedness on the part of the government.

Odunayo said “It is no longer news to many of us again that the federal government has increased the fuel and electricity tariff but we want it to reserve immediately.

“We are tired and we can’t also continue like this and we have suffered enough under this government and can’t be smiling at the same time.

“We are telling the federal government that they can’t continue to take us for fools with their anti-people’s policies.

Also speaking during the protest, Mr Akinteye Babatunde, NANS JCC Ondo Axis said Nigerians have suffered enough under Buhari’s administration and said people would no longer keep quiet on the injustice being melted on them.

“We have started speaking and making our voices known that the increment is unacceptable to us as youths. We shall continue to speak until the federal government knows that we are not happy about the increment of these utility bills.

“It is just too unfortunate that at this period of Covid-19 the government in other countries are bringing succour to their citizens but in Nigeria, our own leaders and government are increasing the pains and suffering of their own citizens.

“It is so sad that our government is doing this to us, and it was because some of us as youths could not stand our ground against this injustice that this government has brought upon us.

“It has shown that this government doesn’t like its citizens and we need to rise up and stand against them. Now, we won’t stop and we would continue to demand and agitate for the right things”. Babatunde said