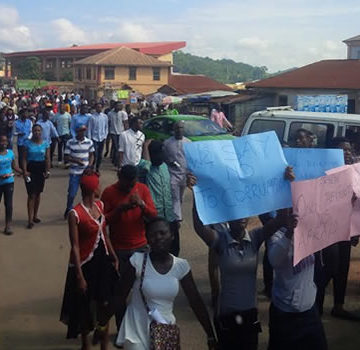 Students of the Adeyemi College of Education (ACE) Ondo in Ondo State on Tuesday, protested over a traffic accident involving three students of the institution on Monday night.

It was gathered that the students who were returning from the school were seriously injured in the accident and were rushed to a nearby hospital.

According to an eyewitness, the accident which occurred at the Catholic Church junction along Ore Road was caused by the recklessness of the driver of the car.

The source, however, said some students of the institution took to the streets on Tuesday morning to protest the accident and blocking some routes leading to the school.

The student disclosed that the students damaged one of the cars involved in the accident during their protest before the arrival of the men of the state police command.

Police disperse protesters in Ondo, as CP calls for calm

Akinfolarin said there was no official report of the incident to the school authorities saying “I don’t think there was anything like that.”

But the state Police Public Relations Officer, Femi Joseph, who confirmed the incident said the three students have been transferred to the Trauma Center Hospital in Ondo town.

He said normalcy has returned to the environment while one of the drivers has been charged to court for reckless driving.