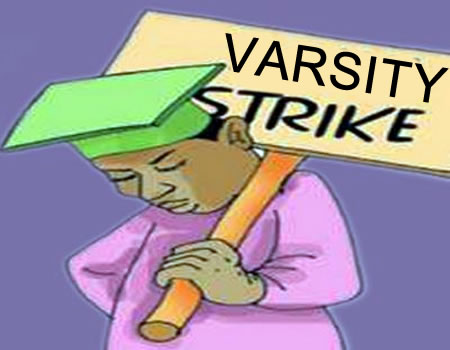 Some parents and students on Tuesday appealed to the Federal Government to resolve the ongoing dispute with the Senior Staff Association of Nigerian Universities and the Non-Academic Staff Union of Universities.

The News Agency of Nigeria (NAN) reports that the unions under the aegis of Joint Action Committee (JAC) announced on Friday that they would embark on a five-day nationwide warning strike.

The industrial action, the unions claimed, was due to the failure of the Federal Government to show commitment towards meeting their demands after the expiration of a 14-day ultimatum.

The leadership of the unions accused the government of failing to show firm commitment toward resolving the issues raised, including the payment of earned allowances to members, University Staff Schools tussle and the renegotiation of the 2009 Agreement

Some affected parents and students, who spoke in separate interviews with NAN in Iseyin, decried the incessant strikes and called for a  solution.

A former lawmaker in the Oyo State House of Assembly, Mr Afeez Adeleke, advised the Federal Government to convene an education summit with major stakeholders in order to find an enduring solution.

Adeleke, who was the Chairman, House Committee on Education, expressed optimism that such a summit would find a lasting solution to the crisis and incessant industrial actions.

“I am a parent too and with my experience when I was chairman of the education committee, I know that the best way to have this resolved is to call everybody in the education sector to a round table,” he said.

A businessman, Mr Ismail Koleoso, who claimed to have two students at the University of Ibadan, appealed to the Federal Government and the unions to find a solution in the interest of the nation.

“My children are in 200 and 400 levels, students now spend five years or more to undertake a four -year undergraduate course.

“Our education system is fast becoming worse on a daily basis from primary, secondary to tertiary level; our government must do something to put this crisis to rest once and for all,” he said.

Another parent, Mrs Maryam Isalu, also appealed to government to speed up the reconciliation process with the striking unions to save the education sector.

A final year student of the University of Ibadan, Miss Temitope Agoro, appealed to the unions and the Federal Government to resolve the crisis.

“I can’t even count the number of times the unions had gone on strike since I was admitted there.

” This is a warning strike and the Federal Government should please help us and attend to their needs.

“We don’t want them to declare an indefinite strike that will not help anyone at all, ” she said.

Another student, Adeleke Opeyemi, also appealed to both sides to work for peace and reach a compromise in the interest of the students.

“Our future and indeed that of the nation should be paramount to both sides, I appeal that they have an agreement before an indefinite strike is declared,” she said.

Despite controversy, Oyo-Ita present at ministers’ swearing in