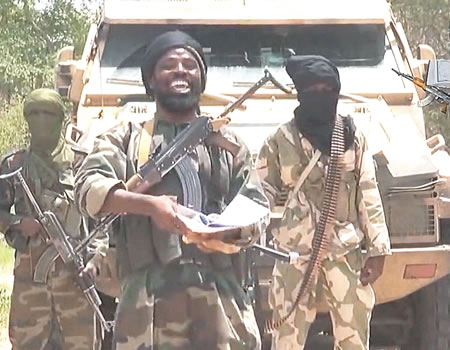 A freed Boko Haram ‘wife’ has returned to the husband who held her captive in Nigeria after hearing he was with another woman.

Aisha Yerima was kidnapped by militants more than four years ago and taken to their Sambisa forest stronghold where she married a commander.

The 25-year-old was among 70 women and children recaptured by the army in a raid in February and was placed in a deradicalisation programme designed specifically for women seized by jihadists.

But in May she is said to have vanished from her family home in Borno’s state capital Maiduguri, taking the baby boy fathered by her Boko Haram husband and some of her clothes.

Her sister, Bintu Yerima, said Aisha’s ‘husband’ was now with a woman who had been her rival.

“Before she left … she had received a phone call from a woman who was with her (in the programme), 22-year-old Yerima told the Thomson Reuters Foundation by phone from Maiduguri. ‘The woman said that she had returned to the Sambisa forest.

“Phone calls to Aisha after she disappeared went unanswered and her mobile has since been switched off, her sister added.

Fatima Akilu, a psychologist and head of the Neem Foundation, an anti-extremism group which ran the state-backed programme, said she had heard that some of the women who were under her care, including Aisha, had gone back to Boko Haram.

‘Rehabilitation, reintegration is a long process … complicated by the fact we have an active, ongoing insurgency.’

Boko Haram’s bloody campaign to create an Islamic state is now in its eighth year with little sign of ending, and has claimed more than 20,000 lives and uprooted 2.7 million people.

“When you have fathers, husbands, sons and brothers who are still in the movement, they (the women) want to be reunited … to go back to a place where they feel they belong, added Akilu.

The allure of power may be another factor in their return. Thousands of girls and women have been abducted by Boko Haram since 2009 – most notably the more than 200 Chibok girls snatched one night from their school in April 2014 – with many of them used as cooks, sex slaves and even suicide bombers

Yet some of these women Aisha, said managed to gain respect, influence and standing within the militant group.

Aisha told the Thomson Reuters Foundation earlier this year that other women kidnapped by Boko Haram were given to her as ‘slaves’ because she was married to leading militant Mamman Nur.

Seduced by the power and disenchanted with the domestic drudgery of their everyday lives, women are far more difficult than men to deradicalise and reintegrate into their communities, said Akilu, who called for more support for the former captives.

“Women often come out successful from deradicalisation programmes, but they struggle in the community.

“Some face a lot of stigma. They feel like pariahs,” Atiku said.

Many Nigerians fear women abducted by Boko Haram have been radicalised and may recruit others or commit violence once they return home, and that their children born of rape may have been tainted by the ‘bad blood’ of the militants, according to a 2016 report by charity International Alert and the UN children’s agency (UNICEF).

‘It needs a lot of work to get communities to accept women who have done the almost unthinkable,’ said Akilu, who explained how the reintegration process can take several years.

“Trying to reintegrate is especially difficult when Boko Haram are carrying out their atrocities almost every week,” she added.

My father only caned me once —Sir Adekunle Oni

Only regional arrangement can save Nigeria —Honourable Omogbehin, Reps. member

Mustapha, the lawyer who brokered the deal to release 82 Chibok girls