The Association of Nigeria Cassava Growers has called on the Federal Government to step up efforts to increase cassava production in the country, this according to the association will serve as a booster to the economy.

The association’s National President, Segun Adewumi, said this in a presentation made to the Minister of Agriculture, Audu Ogbeh, and pointed out that apart from the fact that “cassava can be cultivated in all parts of Nigeria,” its high level of resistance to harsh weather makes it a unique plant as “it grows with rain but survives with dews”.

He canvassed that though garri is about the most popular food made from cassava,  “over 20 local food types like Lafun, Fufu, Tapioka, Eba, Starch, Pupuru and others are derived from Cassava,” he said.

While speaking on the uniqueness of garri, he disclosed that “it can be preserved and will remain fresh for over four years.”

He also enumerated some major Industrial Products that could be derived from cassava; among which are ethanol, industrial starch, cassava flour, glucose syrup and sweetner.

Incidentally, these products are also raw materials to numerous industrial items with limitless domestic and export market potential; an indication that cassava can trigger massive industrial revolution in Nigeria to the extent that every village will have viable cassava industries.

According to Adewumi, findings have revealed that ethanol, which can easily be derived from cassava is used as industrial solvent: which is one of the main ingredients used in paints, printing inks, wood finishers and pharmaceutics among other products. It is also used in alcoholic beverages like whisky, brandy, dry gin and wine.

He added that cassava had the answer to the economic problem of Nigeria.

Adewumi then posited that “from the over 84 million hectares arable land available in Nigeria, if five million is devoted to the production of industrial cassava and if we are able to reap 40 MT of cassava from an hectare of farmland, it implies that we shall have 200,000,000 MT per year”.

‘ECOWAS supporting smallholder farmers in Nigeria, others with technologies for… 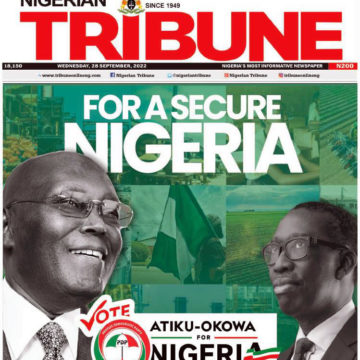