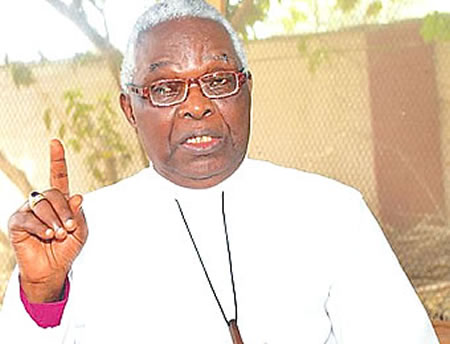 Yoruba Unity Forum (YUF), the umbrella body of all Yoruba socio-cultural advocacy groups, has written an open letter to President Muhammadu Buhari, on the current economic and security challenges confronting the nation.

The body,  in the letter signed by its chairman, The Right Reverend Bolanle Gbonigi, equally  proffered solutions to the problems of unemployment; rising inflation; inability of government to pay salaries and pensions; declining foreign reserves; daily depreciation of value of naira in relations to US dollars, among others.

YUF expressed disappointment over the inability of Mr. President to have audience with it, hence its decisions to write an open letter for the awareness of the generality of Nigerians, when all efforts to discuss with Buhari, over the past six months, were unsuccessful.

The letter was read at a news conference, on Thursday, by the Forum vice-chairman, the Most Reverend Ayo Ladigbolu, at YUF headquarters, Ikenne -Remo.

The non-apolitical organization explained that the Federal Government must as a matter of urgency reduced salaries of elected officers from the top to the least, if the national belt- tightening must be achieved.

“To achieve an effective national belt- tightening, it must start from the top, from the President, governors, ministers and the national and state legislators. Allowances and salaries must be reduced and official convoys trimmed.

” National Assembly legislators in particular must come down to earth with their extra-constitutional allowances. The number of aides across all tiers of government must be reduced while officials, starting from the presidency, must be made to patronise Made-In-Nigeria.

“If our leaders would faithfully embark on these belt-tightening measures, it would be easy to proceed to enforce a general ban on the importation of all comsumer goods and made people consume made-in-Nigeria products only.

” This would reduce demand for foreign exchange, slow down the depreciation of the naira, and, by forcing people to engage in local production of banned goods, create employment and foster self -sufficiency,” it added.

On fight against corruption, YUF, said effort by Buhari’s administration to address the issue lacked both thoroughness and fairness.

They argued that the Economic and Financial Crimes Commission (EFCC) was only interested in allegations against people from the opposition parties.

The Yoruba leaders wondered why some aides of the President who had been accused of corrupt practices were still in the system “untouched”.

” The most important reason why many people voted for you, Mr. President is your promise to fight corruption. Yet, your efforts so far in this direction lack both thoroughness and fairness. The general view now is that the APC has become a safe haven for corrupt people seeking to avoid the glare of the EFCC.

“For the anti-corruption fight to achieve its objectives, it needs to be less selective and more thorough. Special courts must be set up for speedy trials for corruption allegations, the Bar and the Bench must first be cleansed of corruption and people found guilty of corruption must be jailed and shamed to act as a deterrence to others.

” The abuse of the practice of plea bargaining must be stopped and in the mean time, all cases of politically exposed persons who have been indicted by the EFCC and ICPC since 2003 and whose cases are still hanging in the courts, should be expeditiously concluded,” the leaders added.

They equally advised the President not to consign to archives all the recommendations of the national conference of 2014, in the interest of the nation.

The forum said further, “It is therefore painful to read that you have consigned the recommendations of this conference to the archives. We strongly urge you to have a rethink on the matter.

” It will be anti-thetic to democracy to consign to the archives, the products of the minds of a large cross-section of enlightened Nigerians, cutting across all shades of opinion, even if you personally disagree with them.

“To refuse to act on the recommendations of the conference and remain rigidly opposed to any form of political restructuring will confirm you , wittingly or otherwise, as a leading champion of ethnic hegemony.

Reps to probe N100bn released for construction of mini ranches