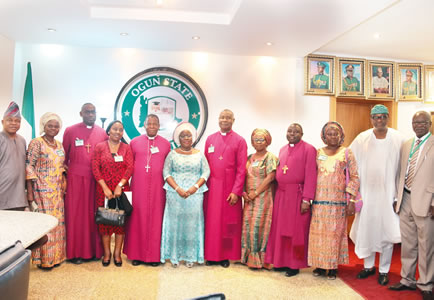 Bishops of the Church of Nigeria, Anglican Communion, have commended the Federal Government on various areas of the economy, while also calling for more efforts to ensure that the country was on a steady path to development.

This formed the basis of the six-point mandate issued at the Standing Committee gathering of the church, at the Olusegun Obasanjo Presidential Library Complex, Diocese of Egba, Abeokuta, Ogun State, from February 20 to 24, 2017 with the theme, I Am Who I Am.

In his welcome address at the event, the Primate, Church of Nigeria, Anglican Communion, The Most Reverend Nicholas Okoh, who spoke for the Standing Committee, while commending the government on the feeding of school children, stating that it was making good the promise of the government, urged that the action spread to all states of the federation.

He also encouraged the government to show selflessness towards the populace; appealed for security as a priority for the people returning to the North-East; commended the anti-corruption efforts but urged for its scope to spread across all tiers of government, boards and groups.

He lamented what he referred to as the seemingly discriminatory and unconstitutional actions of bearing arms, noting that such situations would perpetuate crimes and “is a threat to permanent peace.”

There was also the call on the government to look into the “rising spate of kidnapping all over the country,” which the bishops stated was “alarming and worrisome,” noting that such was “neither good for our security nor for the nation’s economy,” and called for all forces available to tackle the menace.

The governor of Ogun State, Senator Ibikunle Amosun, in his message at the opening ceremony, called on religious leaders to be committed to ensuring religious unity, in order to engender national development.

Reiterating the determination of his administration to rebuild the state, he called on all Nigerians to live together as one and promised to ensure the delivery of the dividends of democracy to the people.

He noted that the meeting should be a platform for religious leaders to seek divine intervention to move the country forward.

He commended the Anglican community in Nigeria and promised that his government would also be committed to promoting religious tolerance and harmony in the state.

Former Primate of the Church of Nigeria, Anglican Communion. The Most Reverend Peter Jasper Akinola, called on the church to come to terms with the present realities. According to him, there is the need for the church to recapture the essence of the name of God.

He condemned the actions of people who committed crimes in God’s name and called on the people to show more respect and imbibe godly virtues.

A former Head of State, Chief Ernest Shonekan, in his message, called on Christians to live according to what Christ preached. He also urged the people to do their best to work for the peace and progress of the nation.

Archbishop of the Ecclesiastical Province of Lagos, The Most Reverend Michael Fape, in his message, appreciated the Governor Amosun-led administration for its efforts to ensure a hitch-free meeting; the Alake of Egbaland, for his support, as well as other stakeholders, who contributed, in no small measure, to ensuring the success of the event.

He called on Christians and Nigerians, in general, to always trust God in all times and seasons, noting that with the theme of the meeting, it was a pointer to the fact of God’s assurance to deliver His people.

He expressed optimism that Nigerians would soon smile again, stating that God will arise on behalf of the people so they can enjoy His never-ending blessings.

The host bishop of the meeting, Bishop of Egba Diocese, Right Reverend Emmanuel Adekunle, who called on Nigerians to contribute their quota to moving the country forward, also urged the government to work towards ending the current recession, rebuild all sectors of the economy and stem insurgency in parts of the country.

He appreciated the efforts of the Ogun State government and all stakeholders to ensure a successful meeting and reflected on the mutual relationship among various religious groups in the state.

Our ordeal at the hands of land grabbers —Ven Babalola

Many so-called Nigerian Christians only come to church, they don’t know God —Gbadero

‘We no longer need establishment of churches in Nigeria, but…’

The demand of obedience (III)