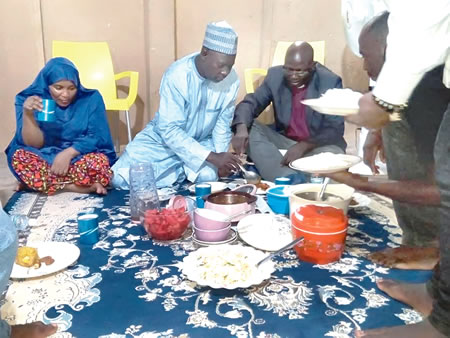 MUHAMMAD SABIU reports that a group of Christian clerics, who have been visiting their Muslim brothers for the past 10 years during the Ramadan period to break fast with them during the evening iftar, returned this year despite the coronavirus pandemic to once again preach love and peace among religious faiths.

AMONG Muslims, Ramadan is a religious duty observed every year. During this period Muslims are expected to reinforce and/or renew their faith by shunning all types of immoral acts like drinking,fornication, theft and fighting. They are also expected to promote and maintain peaceful coexistence with their fellow beings.

An important moment during the fasting period is the breaking of fast at dusk when Muslims are expected to share what they have with neighbours and those who do not have what to eat.

However, this year’s Ramadan is one with a difference. The COVID-19 global pandemic has in a way affected this age-long practice even as hundreds continue to be affected across the country with more than a hundred already died.

To be sure, all places of worship like mosques and churches are currently under lock to maintain social distancing one of the measures required to stem the tide of the pandemic. Thus, other religious duties like praying together in the mosque, going for tafsir and other activities synonymous with Ramadan have been suspended while everyone has been directed to remain at home and observe the health guidelines.

In order to maintain good neighbourliness and peaceful coexistence between Christians and Muslims during the fasting period  despite COVID-19,  a team of Christian scholars  have embarked on the exercise of using the Ramadan iftar (breakfast) to visit their  Muslim friends  and neighbors at home with the aim of  sustaining love between them by breaking the fast together with  host families.

According to Pastor Yohanna Buru, who is the General Overseer of Christ Evangelical and Life Intervention Ministry, one of those behind the idea, “we decided to visit the home of our Muslim brothers in order to promote  inter-religious tolerance, better understanding, forgiveness, peace and unity among different faiths in the state, as well as the whole region.”

Pastor Buru is not alone in this venture. With him since the project began are four other pastors including Maxwell Sanda, who went to the houses of their Muslim brothers at Unguwar Sarki, a predominantly Muslim settlement to break the fast with them.

One of the pastors on the entourage, Evangelist Jonathan Buru, remarked that the General Overseer has been embarking on the Ramadan visit to his Muslim brothers for the past 10 years.

According to Pastor Buru, “Jesus said blessed are the peacemakers, therefore we must do everything to promote peace and unity with all mankind across the universe. God created us to be in relationship with all human beings irrespective of tribe, culture, religion, ethnicity, race, region and continent,’ he added.

Explaining further, Evangelist Jonathan noted that observing the Ramadan breaking of fast with Muslim families is also a way of showing solidarity with people around the world who are fasting and to cement commitment to peace, tolerance and respect within faiths.

Also speaking, Pastor Buru said when Christians were fasting during the 40 days Lenten period, a large number of Muslims also visited their Christian brothers’ homes and joined them in breaking their fast despite the period of lockdown in the state.

“It is important to note here that the inter-faith iftar strengthens friendships and promotes unity among different faiths and this would help in tackling religious extremism and hatred among Kaduna citizens.

“Coming to join Muslims in breaking Ramadan Iftar doesn’t change my religion and I encourage other Christian leaders to always find ways of strengthening interfaith activities.

“Iftar provides an opportunity for Christians to strengthen their relationship with Muslims around the world towards boosting peace and unity,” he declared, noting that Ramadan is a time for purification and getting rid of bad habits, adding that it’s a time for charity.

Speaking to Arewalive, a member of the entourage of the clerics who pleaded for anonymity remarked that, “We should always remember that we are from one family and should remember that we worship one God. Therefore, we must join hands in promoting peace and unity.”

“I think it’s a good thing that Muslims and non-Muslims are coming together for one cause and it is really nice seeing both faiths promoting better understanding and fighting injustice and crime in the state.

A Muslim journalist who also spoke with ArewaLive, Ibrahima Yakubu, remarked that iftar provides an opportunity for both Christians and Muslims to meet and eat and drink together on the same table and dialogue on better ways to strengthen ties, eschew peace and unity.

Making an allusion to the current state of insecurity in Adara community in Kaduna State, Yakubu called on the people of Adara and the Hausa/Fulani neighbours in Kajuru Local Government Area in the state to emulate the Christ Evangelical Ministry by observing iftar together, saying, it is time they sheathed their swords and embraced peace.

‘We have gone past this; hatred among the people of Kajuru must be discouraged,” he said adding that journalists are not doing enough to promote peace in the area.

Also, speaking, Dr Suleiman Shuaibu Shinkafi, who is a peace ambassador in the state, said it is an honour for the Christian clerics to visit him at home to join his family in breaking the Ramadan fast, adding that “we must encourage this pastor in his effort at spreading the words of peace and unity among Nigerians. An iftar is the meal eaten after the sun sets during Ramadan and we are happy breaking it with our Christians brothers.”

Dr Shinkafi also called on other Islamic and Christian clerics to always teach their followers on how to accommodate and tolerate each other irrespective of tribe, culture, religion, race and region.

At the end of the visit, both Muslims and Christians prayed in their own ways and exchanged gifts and souvenirs.

Spraying disinfectants can be ‘harmful’, says WHO