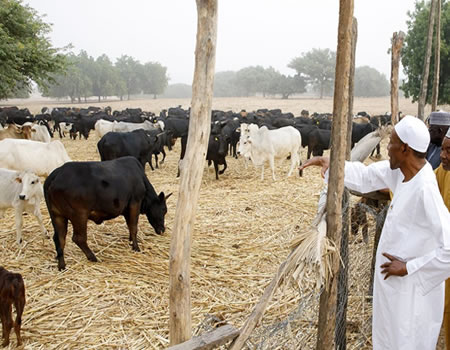 ETHNIC nationality groups in Southern Nigeria on Friday said attempts by President Muhammadu Buhari and his government to create grazing reserves in their areas would fail.

The Federal Government had on Thursday announced the decision of President Buhari to “retrieve” 368 cow grazing sites in 25 states.

It was gathered that all the 19 Northern states are in the president’s plan, which means that the remaining seven are in the South.

The Niger Delta apex socio-cultural group, Pan-Niger Delta Forum (PANDEF) and the pan-Yoruba socio-political organisation, Afenifere, in separate statements, vowed that no inch of their lands would be allowed to be turned to “cow colonies.”

Southern state governments are also insisting that the resolution to ban open grazing by September 1, 2021, stays, just as the Benue State governor, Samuel Ortom on Friday accused President Muhammadu Buhari of turning Nigeria into a country for cows.

The announcement by the presidency to create the 368 grazing reserves in 25 states was received with shock across states in the South and in the Middle Belt areas of the country where stakeholders insisted that the Federal Government under the law had no land anywhere which it could turn to grazing sites or reserves.

President Buhari has no land anywhere in states to turn to cow grazing sites,” an aide to one of the state governors told Saturday Tribune on Friday but asked not to be named because he was not officially asked to comment on the matter.

An aide to another state governor said both the Grazing Reserve Gazette of 1964 and the 1965 Grazing Reserve Law of Northern Nigeria are not applicable anywhere in the South, wondering where the president got the 25 states where his grazing reserves would be sited because the North has 19, not 25 states.

No grazing reserves for president’s kinsmen in S/South –PANDEF

PANDEF on Friday reiterated its stand that no inch of the lands in the South-South is available for grazing reserves. The National Publicity Secretary of the organisation, Ken Robinson, in an interview with Saturday Tribune on Friday, said the stand of the group had not changed. Reacting to President Buhari’s Thursday announcement that 368 grazing reserves in 25 of the 36 states of the federation would be “retrieved” for the grazing of cattle, Robinson said the traditional rulers and the entire people of the South-South had unanimously agreed that no land was available for grazing in the region.

“That is the position of our traditional rulers and the entire people of the region. No inch of our land will be ceded for grazing reserves. That is our position,” he noted.

Afenifere described the attempt by the Federal Government to ‘retrieve’ the grazing reserves as “a waste of taxpayers’ money” and “a sweet pipe dream in a fool’s paradise.”

The organisation, in a statement by its Secretary-General, Chief Sola Ebiseni, said the moves by Buhari did not come as a surprise because the president had never ceased to waste taxpayers’ money on ill-conceived programmes.

Afenifere’s statement reads: “The approval by President Muhammadu Buhari to ‘retrieve’, with dispatch, 368 grazing reserves across allegedly 25 states in the country to determine the levels of encroachment did not surprise Nigerians.

“It does not also matter that having felt the pulse of the nation in his interview with Arise Television in June, the president is still wasting taxpayers’ scarce resources on a programme which conception lacks all conceivable growth capacity.

“It is instructive that the recommending and implementation committee is headed by Professor Ibrahim Gambari, the Chief of Staff to the President, who, in conjunction with Professor Attahiru Jega, during the first term of Buhari, presented a ‘Memorandum on Pastoralist-Farmers’ Conflicts and the search for Peaceful Resolution’, published in January 2018, which contained the same recommendations now being foisted on the nation.

“They have submitted, among other recommendations, that: ‘it is clear that Nigeria and indeed Africa have to plan towards the transformation of pastoralism into settled forms of animal husbandry. The establishment of grazing reserves provides the opportunity for practising a more limited form of pastoralism and is therefore a pathway towards a more settled form of animal husbandry.

Grazing reserves are areas of land demarcated, set aside and reserved for exclusive or semi-exclusive use by pastoralists. Currently, Nigeria has a total of 417 grazing reserves all over the country, out of which only about 113 have been gazetted.’

Afenifere added that “the present policy of the Buhari administration on grazing reserves is the implementation of the script by the Fulani intelligentsia.

“The recommendations which pandered to deceptive national solutions to orchestrated farmers/herders clash nonetheless reek of the odiferous stench of ethnic agenda for settlement of the Fulani in the ancestral lands of other ethnic nationalities.

“The non-Fulani Nigerians are not stupid as the Federal Government probably imagine not to know that the concept of grazing reserves by the Gambari and Jega definitions above is a worse form of official dispossession of their ancestral lands for the inheritance and use of the Fulani than cattle colony, RUGA and grazing routes which they have roundly rejected.

“We recall and support the resolutions of the Nigerian governors, particularly from the South of the country, banning all forms of open grazing and it does not matter to us that some elected governors in a federation would condescend so low to function as members of a committee presided over by an appointed aide of the president, no matter the name in which his office is painted.

“The concept of grazing reserves, otherwise known as Hurumi, which was introduced during the colonial era and immediately after independence failed in the North, particularly in the Middle Belt provinces, notwithstanding a monolithic one-North government and permissive land use regime.

“For the umpteenth time, let the president be told that the constitution which he reveres relentlessly and the Land Use Act which derives equal force therefrom extols the majesty of the people over their land.

“Even the governor who holds the land in his state in trust for the people cannot dispossess any citizen thereof, except for proven overriding public interest through the due process of law.

“The current exercise is not only a waste of taxpayers’ money but it is a sweet pipe dream in a fool’s paradise. Every herder has a state of origin. Let the governments of the respective states make arrangements for settled life for them in the territory where the culture is fully appreciated.”

Governor Samuel Ortom of Benne State has also criticised the president and described him as a Fulani president who is trying to turn Nigeria into a country for cows. Governor Ortom, in a statement by his Chief Press Secretary, Terver Akase, entitled ‘Presidency Turning Nigeria to a Cow Republic’, said it is an irony that the country today has a president who places welfare of cattle above human beings.

The governor, however, informed the president that his latest move was tantamount to whipping a dead horse as Benue people would resist any plan to claim any part of their land.

Ortom said: “If President Buhari must actualise his cattle agenda in Benue State, he should be ready to kill all of us! We know that grazing reserves and cattle routes are the only project that the president has for Nigeria but Benue is not interested in such a project.”

He said the presidency is only bothered about animals and their safety and is deploying all machinery and arsenals of government to impose grazing reserves and cattle routes on Nigerians in a country where insecurity has reached an all-time high with hundreds being killed by armed herdsmen, bandits and other terrorists.

The statement reads in part: “The Buhari administration has turned a blind eye to the unimaginable levels of encroachment on lands belonging to Nigerians by cattle. Mr President has never come out even once to condemn the activities of herdsmen and the attacks they visit on innocent people. The only time the president is heard speaking about the atrocities of the herders is when he defends them.

“It is now clear that the presidency wants to plunge the country into avoidable crisis. Otherwise, what is the justification for President Buhari’s insistence that grazing reserves be established across the country when Nigerians have openly kicked against the policy and have embraced ranching in place of open grazing?

“Millions of Nigerians have been displaced following attacks by armed herders and are currently suffering in IDP camps. Benue State for instance has over 1.5 million displaced people with thousands living in camps and many more forced to flee their ancestral lands to stay under dehumanizing conditions in open fields.

“The Buhari administration does not seem to be worried about the food crisis already ravaging the country. Farmers have been chased into IDP camps by herders and children are dying of starvation in addition to being denied education, yet what is more important to their President is the well being of cows.

“We expected the pitiable condition of the displaced people to be the preoccupation of the President whom they voted in 2015 and 2019. It is unfortunate that the people’s genuine show of love, trust and votes for Mr President are being rewarded with hate, cruelty and dictatorial policies aimed at grabbing their lands to donate to herders and cows. “ We challenge the presidency to name what it has done to alleviate the plight of those displaced by herdsmen in Benue and other states since 2018.

“We ask right-thinking Nigerians to differentiate between the Buhari administration’s approach to insecurity and the Taliban agenda in Afghanistan.

“It is now evident that the government at the centre prioritises the welfare of cattle over human beings and is bent on taking Nigeria back to the pre-colonial era with some snippets of a society where life has become solitary, poor, nasty, brutish, and short.

“The country has been turned to a cow republic by the present administration and the basic principles of equality, justice, fairness and equity which engender peace and suppress anarchy are nonexistent.

“President Buhari has refused to prove wrong those who accuse him of being a Fulani president. He has instead proven that he indeed belongs to somebody. But Buhari is not the first Fulani man to be president of this country. Nigeria had Presidents Shehu Shagari and Umaru Yar’Adua who were also of Fulani ethnicity but were presidents for all Nigerians and treated citizens of this country fairly and equitably.

“Our country has never been more divided on ethnic lines and sentiments as it is under President Buhari who was thought to be the most prepared to lead the country at this time. Under President Shagari and President Yar’Adua, Nigerians were not chided by a horde of presidential spokesmen and social media hirelings for simply expressing their views on government policies.

“Perhaps Mr President is not aware that most of the northern states, including his home state Katsina and the entire southern states have unanimously rejected open grazing of livestock and approved ranching.

Rivers, on Thursday, became the first state in the South-South to enact an edict to outlaw open grazing of livestock. This followed the signing into law by the state governor, Nyesom Wike, the Open Rearing and Grazing Prohibition Law No 5 of 2021, among other laws recently passed by the state House of Assembly.

Speaking on the Open Rearing and Grazing Prohibition Law No.5 of 2021, the governor said condoning open grazing of cattle in any state was inimical to development and peace.

Is it safe for 80 years old to undergo Cataracts operation?

What we got from FG for repairing federal roads —Oyetola