Southern Cameroonians agitate for independence from Republic of Cameroon 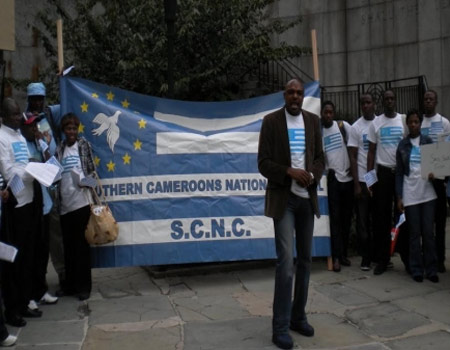 It also stated that the lives of over two million Nigerians living in the Republic of Cameroon would be at risk in case of open conflict over the ongoing agitation for independence.

While addressing newsmen in a press conference, the group’s executives raised the alarm over the ongoing struggle to restore statehood of the people of the former UN Trust territory of Southern Cameroons under United Kingdom Administration for freedom.

They stated that the risk of escalation of the atrocities perpetrated by the government of the Republic of Cameroon on its people, is so high for Nigeria to neglect.

This, according to them may lead to about seven million people coming into Nigeria as refugees.

To this end, the southern Cameroonians urged Nigeria, Economic Community of West African States (ECOWAS), African Union (AU), as well as the United Nations (UN) to prevent the development by prevailing on the Republic of Cameroon to grant independence to the southern region.

In a text signed by Dr. Cornelius Kwanga, Sisiki Ayuk Tabe and Dr. Fidelis Ndeh-Che respectively, it also alleged that there was a plan by government of the Republic of Cameroun to carry out a full-scale genocide in Southern Cameroon.

The renewed agitation came 56 years after a referendum and plebiscite was conducted for the English speaking Southern Cameroon to join others to form the nation of Cameroun.

The text noted that the referendum held on the 11th February, 1961 was for the Southern Cameroun to decide whether to join the former British colony of Nigeria or the former French colony of Cameroun.

The referendum through a United Nations (UN) resolution 1608 enacted a two nation-state, where the Southern Cameroun and the La Rèpublique du Cameroun exist side by side.

However, it said: “We want the restoration of Independence and Sovereignty of the Southern Cameroons (Ambazonia) according to UN Resolutions and Articles.”

“The people of the Southern Cameroons feel, and rightly so, that they have reached the limit of trying to get the annexationist government of La République du Cameroun to resolve their crisis amicably through frank dialogue.”

“We are further stating that Southern Cameroonians as a peace loving people have opted for non-violent resistance against 56 years of servitude, economic and cultural genocide by boycotting the courts and schools of the oppressor for eight months,” they added.

Teachers in Nigeria to earn salaries higher than other workers ―FG