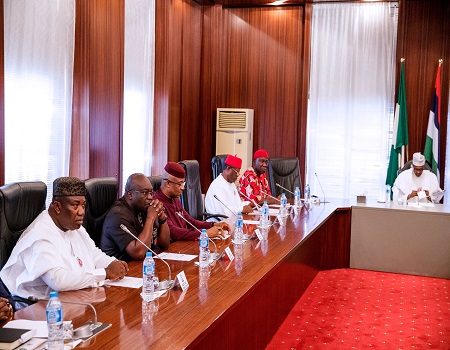 GOVERNORS of SouthEast geo-political zone on Sunday met in Enugu with a move to make the State Houses of Assembly in the zone to enact a law to back up unified zonal security outfit in the zone.

In a communique read by the Chairman of the Governors’ Forum, Chief David Umahi of Ebonyi State, recalled that the joint security programme was inaugurated on August 2019, adding that they had written the Federal Government and would at the appropriate time invite them to know the details of the outfit.

“We wish to assure our people that we have our state vigilant and the Forest Guards in all the southeast states, who work with security agencies daily in our various communities for the protection of lives and property,” he added.

The Igbo governors maintained that the protection of lives and property is paramount to them and were committed to doing the work.

On the Akanu Ibiam International airport, the governors said they were satisfied by the progress of work on the rehabilitation and expansion of the airport, commending President Muhammadu Buhari for his prompt release of a special fund for the project.

While assuring all stakeholder that the Enugu airport would be reopened on March 31, this year, they said the Forum was briefed by Governor Okezie Ikpeazu of Abia State on the state of Enugu/ PortHarcourt Highway.

“Forum commended the Federal Government on speedy and quality work, though a number of sections are yet to be attended to, especially the Aba/PortHarcourt axis being handled by a Chinese company,” they stated.

While Governor Ikpeazu further briefed his colleagues on the Enyimba Economic City, the governor of Anambra State, Willie Obiano, who was represented by his deputy, Dr Nkem Okeke, briefed in the progress of work on the 2nd Niger bridge.