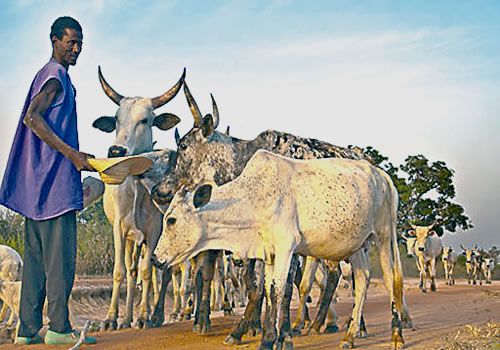 THE Federal Government continues to pursue the unconstitutional agenda of providing grazing reserves across the country despite land issues being solely the preserve of the state governments.  The best Federal Government can and should do is to provide the enabling environment for owners of cattle to establish cattle ranches in their respective states – perhaps by encouraging the Bank of Industry to provide secured loans to ranchers – and leave the individual states to decide whether or not to grant Certificates of Occupancy to intending ranchers.

Ranching is an industry, and President Muhammadu Buhari should be wary of appearing self-serving in proposals for the Federal Government to acquire land to be given to ranchers.  There has never been any suggestion that other industries could benefit from such Federal Government largesse, and President Buhari’s assets declaration of 270 herd of cattle, certainly makes him a significant cattle owner.  He must, therefore, avoid creating perceptions that the proposed grazing reserves are a ploy to benefit himself and other Fulani cattle owners, to the detriment of manufacturing industries.

Any “Grazing Reserves Bill” must, therefore, be an enabling bill, setting out the requirements for any reserve established, the facilities they must provide, and the care and husbandry of the grazing animals.  It must not be a prescriptive bill trying to set out how government would acquire, grass and dole out such “grazing reserves” to “deserving” ranchers.

Then, there is the problem of roving, rampaging ‘Fulani herdsmen’.  Sometimes, the simple solutions are the best.  This particular problem would be quite literally stopped dead in its tracks if the Federal Government puts forward an executive bill and it is passed, to make the moving of cattle and other animals in droves illegal, and requiring the transportation of animals to be done by suitable road, rail or water means of transport.  There would of course need to be limited exceptions, allowing say, the herding of no more than 20 animals at a time over a distance no greater than two kilometres, to allow a small holder farmer move his animals from one of his grazing pastures to the next, while making him liable for any damage caused by his animals to property of other people on the way.

The passage of such a bill would bring major economic benefits, firstly in stopping the ongoing wanton carnage and destruction of farmers’ crops and property by herdsmen, but just as important, in also expanding the economy and creating jobs.  Think of the boom in the haulage and transportation industry, as it strives to meet the increased demand for its services. The local vehicle assemblers looking for carpenters/woodworkers to erect wooden cattle pens on the chassis of their trucks; the drivers need these for their cattle trucks. The roving “Fulani herdsmen” would also be brought into the 21st century by becoming non-nomadic practitioners of up-to-date animal husbandry.  There would need to be the expansion of the regulatory body – presumably within the Ministry of Agriculture – to monitor and regulate the conditions in which the animals are transported, with vets on hand to ensure the animals are fit to travel, and fit for consumption at their journeys’ end at the abattoir.  The new Act should provide a moratorium of three months from its enactment for the haulage companies to get themselves ready, and the cattle owners to provide loading stations at their ranches/grazing pastures where they keep their cattle.  And to expedite the legislative process, the present “Grazing Reserves Bill” should be stood down and replaced by a “Grazing Reserves and Prohibition of Animal Droving Bill” incorporating all the foregoing.

State of the union: Yoruba position and prospects