‘We shot him, cut the head, removed his heart’ 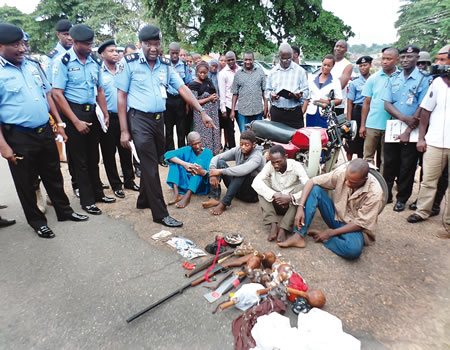 A 33-year-old man’s quest to do a legitimate business in cashew purchase has sent him to an early grave, as his supposed business partner terminated his life abruptly in a bush in Kwara State. Not only that, the late businessman, Oyeyemi Akintoye’s remains were not allowed to be given a befitting burial as the partner, in connivance with his friend removed his heart and cut off his head, hands and legs, allegedly for the purpose of money ritual.

The disclosure of the frightening incident was made by the Commissioner of Police in Oyo State, Abiodun Odude at the Oyo state Police Command headquarters in Ibadan, on Thursday, while briefing journalists on the arrest of four suspects accused of conspiracy, kidnapping, armed robbery and ritual killing.

He gave the names of the suspects as Babalade Gbenga Opeyemi (40), Jimoh Tunde (37), a herbalist, Agboola Abubakar (65) and Ganiy Ahmed Olatunji (42).

According to the police commissioner, a woman reported at Atiba police station that her husband did not return from a business trip, and all efforts to reach him failed as his phone lines could not be reached.

“This is a case of conspiracy, armed robbery, ritual killing and kidnapping. Opeyemi said he wanted to do ritual to get rich quick. He approached 65-year-old herbalist, Pa Abubakar, who said he did not have what it would take to make such charms. He took him to Alfa Ganiy Ahmed Olatunji.

“Olatunji told the duo that they would need a human heart to carry out the ritual. Opeyemi contacted his friend, Tunde on how to get human parts.

“The deceased was supposed to bring N10 million for a business transaction but brought N100,000. During interrogation, Opeyemi and Tunde disclosed that they robbed their victim of the N100,000 before Tunde shot him with a gun and killed him.

“After the killing, they dismembered his remains, removed the heart, private part, hands and legs; and took it to Olatunji to do money ritual for them.

“But based on information, we were able to arrest one of them and eventually picked up the rest of them.”

He added that the suspects also led the police to where the heart, two wrists and decomposed headless body of the victim were kept.

“We are bringing this to the knowledge of Nigerians so that they will know what is happening in the country and be much more careful,” the police commissioner further remarked.

Below are excerpts of the suspect’s confession

The deceased was my brother’s business partner and used to come to purchase cashew. He brought money to my brother, Yinka, to buy cashew. My brother gave me the money because I was the one who knew the business well.

Akintoye loaded the goods and left. He then told me that by the time he would return, he would be coming with about N10 million. My friend, Jimoh, and his wife were with me then, working on the cashew farm.

That was how Jimoh and I conspired that we should rob Akintoye of his money. Akintoye called me on the phone that he was on his way; that I should meet him at Ajase. We met him and picked him with a motorcycle. When we got to the spot where we wanted to carry out our plan, I parked and got down from the bike. My friend, Tunde, also got down and pointed a gun at Akintoye.

Akintoye started pleading. He dropped the bag he was holding and said we should not kill him because of money. When I searched the bag, I found only N100,000 and some documents. Tunde said we had no option than to kill him because he had already seen us with a gun. He said he would expose our deed if he was not killed. That was how Tunde shot and killed him.

When we got back home, Tunde reminded me of Alfa Olatunji’s demand for a human heart when we wanted to make charms to boost my business. He also said he needed some parts, suggesting that we should go to where we left Akintoye’s remains to take them.

I replied him that that Alfa said he was not going to do it for us again, and that I was also no longer interested, since my business had boomed again. He repeated that he also needed some human body parts, so we went back. Tunde cut the head, two hands and removed the heart.

When we got to the Alfa, he chased us out, saying he had already told us he was no longer interested in such a job. He advised that we should throw the head away and preserve the heart and the hands with gin.

I was a timber contractor. Opeyemi told me he was looking for charms to boost his business and make him wealthy. We went to a herbalist, Pa Abubakar, but he said he didn’t know how to do such. Baba took us to an Alfa whom he said might be able to help us.

Alfa promised to do it for us. That was when Opeyemi told him that he would also like to do money ritual. Alfa replied that it would cost us a human heart. I spoke with Opeyemi and assured him that I would help him get a human heart if he would give me money. He gave me money but I spent it without doing the job it was meant for.

He quarreled with me but we settled it. When his cashew business started, he took me to his farm as a labourer. I heard Opeyemi discussing with Akintoye one day and he later told me the man was bringing a huge amount to buy cashew. He suggested that if he could rob him of the money, it would be better than money ritual. And we both agreed.

We picked Akintoye the day he came and along the way, we stopped. As Opeyemi narrated, I shot him dead. When we discovered the amount that was in his bag, we regretted the killing. But we decided to remove his body parts which we took to Alfa for money ritual we went to him for initially.

But Alfa chased us away, saying he had told that he was no longer interested in the ritual process. When we asked him what to do with the parts, he suggested we throw the head away and preserve the rest with Schnapps.

We killed Akintoye in a bush at Igbonla and threw the head in Afelele River in Offa, both in Kwara State. We threw one of the victim’s phones away and I kept the second one for myself.

We got the gun from a Fulani who we saw coming with a bush meat he killed while we were on cashew farm one day. We bargained for the bush meat. Opeyemi also asked if he could sell his gun to us and the Fulani answered that he would if money was readily made available, saying he would buy another one.

They negotiated and Opeyemi paid him N13,000.

Someone introduced me to Baba Abubakar and he did certain spiritual work for me, for which he collected N2000. After using the soap he gave me, I saw that it worked for me. That was how our relationship started. Baba said he didn’t know how to collect money from people, saying that he would bring clients to me so that I would charge them for consultancy and the spiritual work that would be done. He said we would share whatever I got from such jobs.

It was Baba who brought Opeyemi and Tunde to me. Opeyemi said he was into cashew business and would like me to do a charm that would make the business boom. He said his bosses used to cheat him on the business proceeds.

I had earlier told Baba that I didn’t know how to do money ritual but he said we should just collect money from them. So, I told Opeyemi and Tunde that they would need to bring a human heart for the ritual. They asked for how much it would cost for me to get one and I said N120,000. My plan was that I would share the money with Baba as I believed they would go for the payment option.

To my shock, Tunde reacted and said they would not need to pay, promising to get a human heart for his friend. When he said that, I was scared. Later, I called Opeyemi that his friend was too desperate. I backed out of the money ritual and told him not to bring his friend to me again but should come only if he needed to consult me.

I ran to Baba’s house and he called the two friends to settle the issue. I explained that I became scared when Tunde said he was going to kill someone to get a heart. It generated another issue between Tunde and Opeyemi to the point that Tunde broke a bottle in Baba’s parlour and said he was going to ‘mark’ Opeyemi.

Eventually, everything was resolved and Opeyemi and I concluded that we did not have interest in the money ritual again.

It was two months after that they came to my house one night. Both of them were drunk. I saw a bag at the back of their motorcycle. They told me they brought the human parts but I replied that I already told them I was not interested and Opeyemi also said the same, asking if he wanted to implicate me. They asked what they should do with the parts and I asked them to throw them away because I was scared. The mistake I did was that I did not report to the police.

She gave another man my son —Boyfriend