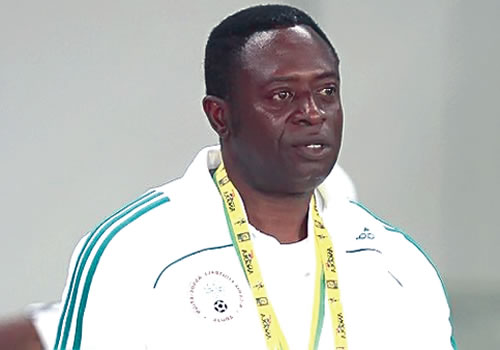 s HORTLY after former Super Eagles’ skipper Stephen Okechukwu Keshi’s sudden death in Benin City on June 7, 2016, Shaibu Amodu, under whose competent wings Keshi had cut his managerial teeth, was among the first Nigerian football luminaries to mourn him and extoll his virtues. Keshi, born in January 1962, was 54 at the time of his death. But little did Amodu know what fate had in store for him: in the early hours of June 10, he also drew his last breath, aged 58. And so it was that within a space of three days, in a bizarre twist of fate, the bodies of two of the most important figures in Nigerian, indeed African, football over the past three decades both lay in the mortuary of the Stella Obasanjo Hospital, Benin City.

Shaibu Amodu’s death marks the end of an era in Nigerian football. Close followers of the game and of Amodu’s stellar coaching career will remember a deeply religious man, a patriot who shot from the hip, a studious follower of changes in the game, a socially conservative man and, above all, a genuine lover of football.

Football in Nigeria is played by heroically committed young men and women. Sadly, the same cannot be said of those who administer it. It was the lot of Shaibu Amodu to have had to fashion some excellence from the moral and bureaucratic morass that is the Nigeria Football Federation (NFF). That he excelled notwithstanding is testimony to his vision, personal discipline, and uncommon forbearance.

Technical Director of  the  Nigeria Football Federation at the time of his untimely death, Amodu managed the Super Eagles on four different occasions. Always relieved of his position each time in the untidy and amateurish manner typical of the NFF, a lesser man would have rejected the offer of return. But Amodu loved Nigeria more than he loved football. And so, on three different occasions, long after any sane person would have walked away, he answered Nigeria’s call.

Amodu qualified the Super Eagles to the World Cup, twice, first in 2002, and then in 2010. On both occasions, the powers that be callously denied him the ultimate dream of every manager-to coach a team at the World Cup. Despite these disappointments, Amodu remained faithful and loyal to the cause of Nigerian football. Perhaps he figured that after everything that the authorities had done to him, he had nothing else to lose. After all, he had survived finding out about his own sack in the newspapers, being owed salaries totaling several months, and having his appointment confirmed long after he had been in the saddle.

The depth of Shaibu Amodu’s affection for Nigerian football and the crisis facing the same can be gauged from his last interview with the British Broadcasting Corporation (BBC) in March 2016. Lamented Amodu: “I must confess that all is not well with Nigerian football in terms of structure and funding. We really need to rejig the whole aspect of our football if we have to be serious and sustain development at a high level.” He then concluded: “I’ve been taking notes and these are some of the things I will bring up when I meet with the NFF.”

No one knows whether that meeting ever took place, or if it did, what Amodu told his chronically ungrateful employers. What we do know is that Amodu left us with an unflattering picture of  the state of  Nigerian  football. It would amount to a gratuitous insult to the man and all that he stood for if the nation were to jettison his words. It is the reform of Nigeria’s football that, henceforth, should obsess those who genuinely mourn Amodu. There is no other way to honor the memory of the departed.