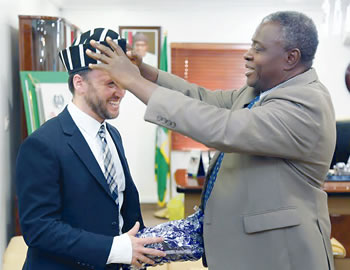 The Acting Israeli ambassador to Nigeria Mr Nadav Goren, has said that he would leverage on the existing co-operation between Nigeria and the State of Israel.

He said this in Abuja during a courtesy visit to the Executive Secretary the Nigeria Christian Pilgrims commission, Reverend Tor Uja. He explained that the two countries had close co-operation which he assured would continue. His words,’’ I worked with the former ambassador, there is need to hit the ground running.’’

The diplomat informed his host that the reason for his visit was to have an introductory meeting with him and strengthen the co-operation existing between the commission and the Israeli government.

He promised to have an enlarged meeting with all the consular officers of NCPC and the Israeli embassy on how to fast -track visa issuance for pilgrimage leaders and pilgrims.

He thanked the executive secretary for the visionary interest he shared with him on how to have better working relationship. The acting Ambassador also welcomed the agricultural initiatives being canvassed by NCPC in which youths on pilgrimage would have the opportunity of learning from the rich agricultural experience of Israel and come back home to replicate it.

He assured the NCPC helmsman that the Bilateral Air Service Agreement (BASA) with the State of Israel would be given accelerated push through the legal department of the Ministry of Foreign Affairs  and Aviation.

In his response, the executive secretary informed his guest that he recently had fruitful discussions with officials of the Israeli ministry of Foreign Affairs and would be going back to further intensify discussion on the issues raised.

He explained that there were challenges faced by the commission in the course of pilgrimage to Israel which the issue of visa for a short duration was one of them. According to him: “we have the leaders of the pilgrimage movement In Nigeria and they should be given one year visa”. He posited  that this would help in the organisation of pilgrimage if  visas  are issued to last for at least one year.

Reverend Tor Uja intimated the acting Ambassador that the commission targets  about 20,000 to 25,000 pilgrims in this year’s pilgrimage exercise.

He equally stated that the commission is challenged by the Israeli agricultural capacity which he would want Nigerian youths to leverage on as they formed  65 per cent of the nation’s population.

The NCPC boss also called on the Israeli authorities to step up the issue of direct flight from Nigeria to Israel. His words,” we believe that if the BASA agreement is activated, it will  reduce the long hours on board.’’ According to the NCPC boss,” we will love to reduce the cost of pilgrimage so that more people can go on pilgrimage.’’