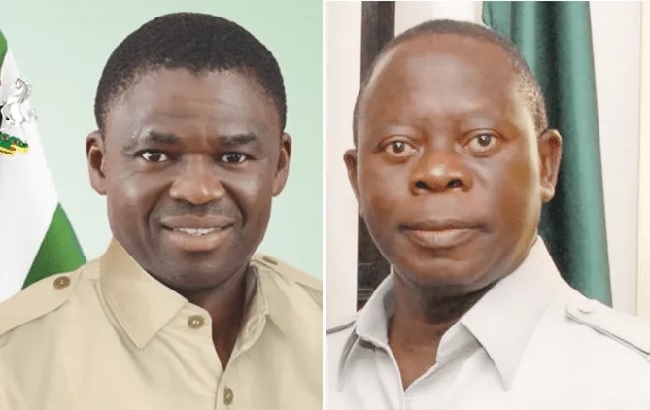 Edo State Deputy Governor, Comrade Philip Shaibu, has acknowledged the roles of the former National Chairman of the All Progressive Congress (APC), Comrade Adams Oshiomhole, in his political career, saying the former labour leader taught him (Shaibu) all he knows in politics.

Shaibu made the assertion, on Sunday, during a thanksgiving service held at Saint Philip Catholic Church in Jettu, Etsako West Local Government Area of the state to celebrate the second term in office of the deputy governor and the victory of the September 19 governorship election in the state, which he won alongside his principal, Governor Godwin Obaseki, under the platform of the Peoples Democratic Party (PDP).

Speaking on his conflict with the former APC National Chairman, the Shaibu reiterated: “Adams Oshiomhole taught me all I know now politically. He made me stand my ground and help us end godfatherism. I have no quarrel with Adams Oshiomhole.”

While thanking God for His mercies and faithfulness the Deputy Governor said that the Edo State governorship election was the first election in the history of Nigeria where both the APC, PDP and other political parties came together to support Godwin Obaseki and himself for the purpose of peace and sustainable development of the state, adding that their victory was a victory for the peace and unending development of the State.

He expressed the need for Nigerians to see competition and contention as a source of energy, innovation and inspiration, saying, “We must come together as a nation in recognising our shared interest in placing boundaries on our competition in order not to divide the nation into hostile and irreconcilable camps. This dangerous impasse is one area where the wisdom of Governor Godwin Obaseki has reigned supreme.”

According to him, “we have a governor who is selfless. He doesn’t think about himself but about the state and about the next generation. Obaseki is indeed a selfless governor. We have restored justice for the less privileged in society and our biggest goal towards the poor is to improve their prospects and productivity. We must all join hands together to build a virtuous society. We must not let go of our moral code of disciplined society.”

The Deputy Governor described his wife Mrs Maryann Philip Shaibu, as the Pillar behind his political journey, admonishing that, “when you have a wife that stands with you and by you, not only to think for you but to also support your mission then you must be a successful man. My wife has been supportive as a prayer warrior and partner.”

On the security situation in the state, the deputy governor said: “The state government was on top of the game. We are making efforts to make sure that all Edo Indigenes are able to celebrate Christmas peacefully without fear of insecurity.”

Earlier in his homily titled, “Rejoice In The Lord”, Rev Father Godrick Shabba, admonished believes to be strong in the Lord and always return Glory to God, saying that it was a heart of gratitude to God that brought the deputy governor and his family to the house of God to return glory to God.

The clergy noted that “authority comes from God, He gives and places people in power” and called on the deputy governor to continuously be his brothers’ keeper.

“The people elected you and reposed their confidence in you as their Messiah through their votes. The task before you may appear as uphill but with God all things are possible,” the Rev Father counselled.

In his remarks at the thanksgiving service, the Okumagbe of Uwanno Kingdom, H.R.M. Dr George Egabor, JP, described Comrade Shaibu as a man of deep strategy, who had mentored many young people into Politics.