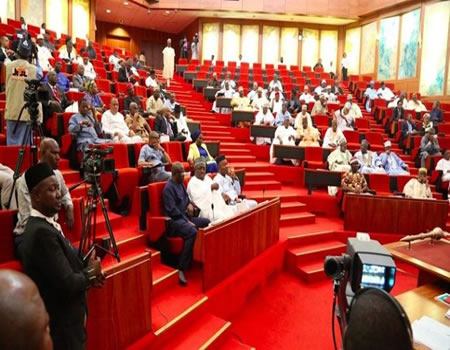 The Senate on Thursday kicked against the plan by the Federal Government to downgrade the Akanu Ibiam International Airport, Enugu, as earlier threatened by the immediate past Minister of Aviation, Senator Hadi Sirika.

It also urged the government to rehabilitate the runway of the airport to guarantee the safety of passengers and aircraft and in conformity with international aviation standards.

The Senate’s resolutions followed a motion on “the threat to downgrade” the airport by Senator Victor Umeh (APGA, Anambra Central) and co-sponsored by 16 other senators during plenary.

While leading the debate, Senator Umeh observed that the former Minister of Aviation, Senator Sirika, had threatened to downgrade the airport because of what he considered as imminent dangers posed to air travellers by the presence of a nearby market.

He stated Sirika had expressed concerns over the presence of a state radio mast on the flight path of airlines that threatened the safety of incoming aircraft, an abattoir, which attracted large birds and exposed aeroplanes to the bird strikes; the location of a free trade zone and the decrepit state of the runway, hence threatening to downgrade the Airport.

He, however, appreciated the concerns of the former minister over the safety of passengers and aeroplanes that were using the Airport, noting that the airport currently serves travellers from Enugu, Kogi, Anambra, Ebonyi, Benue, Cross River and other adjoining states.

According to him, the former minister also asserted that Enugu is to the East what Kaduna is to the North, being the major connecting link to the South Eastern states.

While stressing that the economic importance of the airport to the South East could not be overemphasised, Umeh however, hinted that the Government of Enugu State had removed the structures that the Minister considered as major challenges hampering the smooth operation of the Airport.

He further argued that, rather than talk about downgrading the airport, the federal government should think of rehabilitating it to meet international standards.

Senators who contributed on the matter supported the call to rather upgrade the airport rather than downgrade it.

In his closing remarks, the Deputy President of the President, Ike Ekweremadu, who presided over the plenary, said that the airport was of great importance adding that relevant authorities in Aviation Ministry must speed up the upgrading of its facilities.