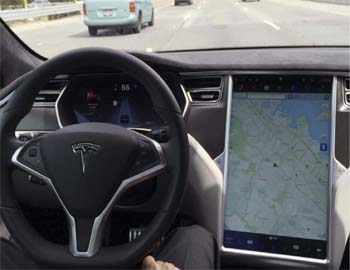 A former Navy SEAL has become the first person to die at the wheel of a self-driving car – and a witness has claimed he was watching a Harry Potter movie when his Tesla collided with a truck while on autopilot.

Joshua Brown, 40, died after his computer-guided Tesla Model S plowed into a tractor trailer on a freeway in Williston, Florida, in May, Dailymail reported.

Despite the claim, Tesla says it is not possible to play films on the vehicle’s touch screen – however it is possible Brown was using another device.

The driver of the truck, Frank Baressi, said the Tesla driver was ‘playing Harry Potter on the TV screen’ at the time of the crash.

‘It was still playing when he died and snapped a telephone pole a quarter mile down the road,’ Baressi, 62, said.

‘He went so fast through my trailer I didn’t see him,’ he added.

Baressi says he only heard the movie in the aftermath of the crash – and police did not mention the driver being distracted by a film in any of their reports.

Tesla said its autopilot system failed to detect the truck because its white colour was similar to that of the bright sky, adding that the driver also made no attempt to hit the brakes.

Preliminary reports suggest Baressi’s truck left in front of Brown’s Tesla at an intersection of a divided highway where there was no traffic light, officials said.

By the time firefighters arrived, the wreckage of the Tesla – with its roof sheared off completely – had come to rest in a nearby yard hundreds of feet from the crash site, assistant chief Danny Wallace of the Williston Fire Department said.

It has also emerged that Brown – who served in the Navy for 11 years – narrowly avoided a very similar smash earlier this year, when his car did not notice a white truck turning in on him on the freeway.

Tesla confirmed the man’s ‘tragic’ death, but defended its vehicles, saying they were safer than other cars.

‘This is the first known fatality in just over 130 million miles where Autopilot was activated. Among all vehicles in the US, there is a fatality every 94 million miles,’ the company said in a statement.

It said neither the driver nor the car hit the brakes as the trailer passed over the Tesla, with the self-driving vehicle colliding with the bottom of the truck.

The company claimed that had the trailer crashed into the front or the rear of the Model S, the driver would have survived.

The statement added that motorists should keep their hands on the wheel and ‘be prepared to take over at any time’.

Tesla informed the NHTSA, which has launched an investigation. It has called for ‘an examination of the design and performance of any driving aids in use at the time of the crash’.

The agency has not demanded a recall of the vehicles.

Brown died of injuries caused in the crash on May 7.

He was involved in a similar near-miss on April 5 and posted a video of the close call online.

The video shows the Canton, Ohio, resident taking manual control of the Tesla to swerve out of the way of a white truck as it moved in front of him on the freeway.

1.4m children at imminent risk of death in famines —UN