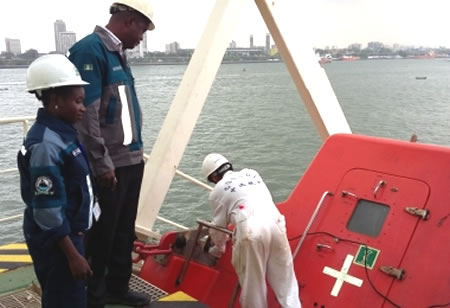 The Nigerian Customs Service (NCS) has revealed that  agencies of government have not complied with the Federal Government directive on joint inspection of vessels at seaports. This is even as the NCS confirmed that government agency officials do collect ‘gifts’ from vessel captains during vessel inspection exercise.

Speaking recently in Lagos during a round table session by the Maritime Anti-Corruption Network (MACN) and its private sector facing arm, Convention on Business Integrity (CBI), the Comptroller-General of Customs, Col. Hameed Alli (rtd), stated that intelligence reports available to different government agencies about a particular vessel is a major reason joint inspection of cargoes has remained elusive at Nigerian ports.

According to the Customs CG, who was represented at the event by the Head of Enforcement, Tin-Can Island Customs Command, DC Dera Nnadi, “When it comes to boarding of ships by agencies of government for inspection, I am the one directly responsible.

”The standard practice whenever a vessel arrives at our ports is that, port health officials first go into the vessel to ascertain if the health of the people onboard the vessel will not be harmful to the people that will be inspecting the vessel.

“Once the port health officials confirm that the people onboard the newly arrived vessel have no health issues, the flag is raised, and officials of other government agencies are now expected to board the vessel for inspection.

“For instance, if the Department of State Service (DSS) otherwise known as the State Security Service decides to board a vessel at its own time due to an intelligence report exclusive to them, the NCS does not have the power to stop them. Same applies to other agencies of government during inspection of vessels at the ports.”

The Customs Head of Enforcement also confirmed that officials of some government agencies do collect gifts from captains of vessel during vessel inspection exercise.

“On collection of gifts from vessel captains by officials of government agencies during vessel inspection, we are currently addressing that issue. The standard practice world over is that inspecting officers are allowed to be served food or tea. Taking of gifts is not allowed, but it does happen at our ports, and the issue is currently being addressed by all agencies of government,” the Customs CG added.

How to use okra for diabetes treatment —Scientists