• Says road to be completed in 6 months 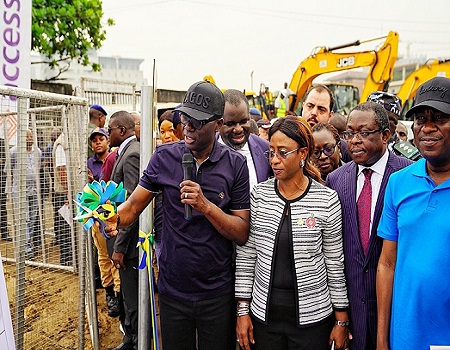 Lagos State governor, Mr Babajide Sanwo-Olu, on Wednesday officially flagged off the upgrade of Victoria Island-Oniru axis road, a development which witnessed jubilation amongst residents living in that axis as they all came out to receive him in their midst for the exercise.

The project, which is being executed through the Public Infrastructure Improvement Partnership (PIIP) arrangement, was conceived and conceptualised four months ago by Planet Projects at the instance of Access Bank Plc, the major partner.

Governor Sanwo-Olu, while flagging off the project, said the partnership was another “deliberate action” to solve traffic congestion and relieve Lagos residents of pain, describing the flag-off as another milestone the state government had achieved through partnership with the private sector to deliver projects that would directly impact lives.

“This flag-off is another milestone we have achieved through partnership with the private sector to deliver projects that will directly impact lives.

“We came to this area about 4 months ago at a presentation at Four Points and we told our partners that immediately the rain subsides, we would come back and start with the development of the Oniru into Victoria Island from Lekki.

“I’m happy that within a short time frame, a lot of work has been done. We are here being the 3rd of December, and, with the stoppage of the rains, work can now start immediately.

“For me, my colleagues and our partners, it is a strong point that we deliver on our commitments. I want to assure you that we will deliver all the commitments we’ve made. So, I’m happy that we can tell everybody in this corridor that we are back here. Work will start in earnest,” the governor said.

Governor Sanwo-Olu equally said the flag-off of the project was a validation of his administration’s commitment to regenerate, upgrade and develop the entire Victoria Island and Oniru axis.

He appealed to the residents to cooperate with the contractors, saying the project construction might come with some pains but assured that the citizens would reap the full benefits of it in a matter of months as the project, according to him, will be completed in six months.

He also praised Access Bank for supporting the government to regenerate the Oniru-Victoria Island-Lekki circulation and bringing good traffic modulation and flow to the axis.

Wigwe, who was represented by the Executive Director, Mr Victor Etoko, said the bank remained committed to help Lagos government deliver infrastructure that would be economically sustainable.

Giving details of the construction work, Planet Projects Managing Director, Mr Biodun Otunola, said the project would lead to the construction of Alaba Oniru Road, Akingbolagbe Road to Muri Okunola Roundabout, adding that there would be the regeneration of seven junctions prone to traffic on the axis.

He listed road improvement, junction improvement work, traffic system management measures and classification of roads as 1-way street as part of the proposed solutions in the project.

Special Adviser to the Governor on Works, Mrs Aramide Adeoye, in her opening remarks, said the project was significant in a number of ways because it involved private sector participation, stressing that the private sector was seen as a critical partner in the growth and development of the economy of Lagos State.

Araoye said the private sector, which controls about 80per cent of the State’s Gross Domestic Product (SGDP) was crucial in the government’s drive to bridge the infrastructure gap and to also build the dreamed smart city for Lagos.

“Access Bank has keyed into one of the ways to realize the state’s objective of making Lagos the 21st-century economy by partnering with the state government in infrastructural upgrading of Oniru network of roads under a Public Infrastructure Improvement Partnership (PIIP) arrangement,” she said.

It would be recalled the upgrade of the road along with axis was aimed at improving the traffic linkage and travel time around the highly commercial axis of Victoria Island.